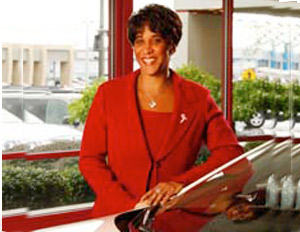 Business is slowly picking up at Bob Ross Buick/GMC and Mercedes-Benz (No. 30 on the be auto dealers list with $49.6 million in revenues). Multicolored rows of polished vehicles shine in the springtime sun on the Buick/GMC lot–among them the Acadia, a crossover vehicle; the Buick Regal, a luxury sports sedan; and the Yukon, a 300-plus horsepower behemoth SUV that boasts seating capacity for nine adults.

Right next door, the Mercedes-Benz dealership is undergoing a complete renovation to make it sleek and modern. Overall sales for 2010 are up about 10% from the prior year and president Jenell Ross, the second generation to head the 37-year-old business, is optimistic that the company has turned the corner as the automotive industry gradually emerges from its worst downturn in history. “It’s something that Mercedes-Benz wants and it’s something that I need to do, but it just wasn’t good timing in years past,â€ Ross says of the improvements. “A lot of my competitors have renovated or built new facilities. So, from that standpoint, you want to make sure that you’re maintaining a great representation of the brand.â€

While things are looking up for the GMC and Mercedes-Benz dealership, this business has been through more than its fair share of trials, tribulations, and heartbreaking losses. First was the 1997 passing of Jenell’s father, Robert Paul Ross Sr., the company founder for whom the dealership is named. His wife, Norma, and two children (Jenell and her brother, Robert Ross Jr.) stepped in and continued to successfully grow the business. But tragedy struck again on April 23, 2010. While the country was in the throes of the Great Recession and scores of auto dealerships were being forced to close shop and the future was uncertain at best, Norma Ross, the matriarch of the business and family, also passed away.