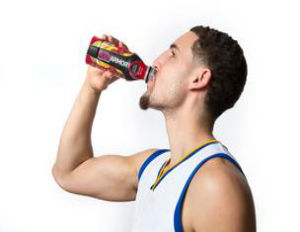 Just a couple months ago Klay Thompson was just another basketball player for the Golden State Warriors but all of that has changed. Â He didn’t rank in the top 100 NBA salary earners in 2014 and he wasn’t even invited to play in the 2014 All-Star game. But Â this year, he wasn’t just invited to play in the 2015 All-Star game, he started. He was also a strong contender in the 3-point contest.

Now just weeks after All-Star Weekend, Thompson has signed an endorsement deal with BodyArmor Sports Drink.Â  BodyArmor was launched in 2012 and it’s co-founder Mike Repole told Forbes that the brand has experienced 100 percent growth in it’s three years of existence. Repole says BodyArmor will be bigger than vitaminwater in the next five years. According to Forbes, vitaminwater is the No. 1 water brand in the United States.

“They have some great athletes signed up and that really drew me,” Thompson said in an exclusive interview with Golden State of Mind. “I’m really excited about the partnership and to work with BodyArmor.”

A statement released by BodyArmor stated that as part of the deal, Thompson would appear in local advertising campaigns and be featured in social media activations to generate brand awareness.

Thompson also has an endorsement deal with Chinese shoe company Anta. But perhaps equally as impressive as his endorsement deals, is the fact that Thompson has skyrocketed his salary for 2015 from an average $2.4 million per year to an average $17.5 million according to Spotrac.