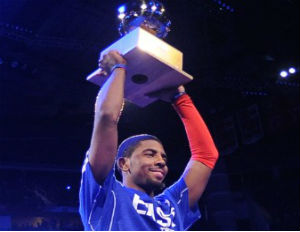 One of the hallmarks of NBA commissioner David Stern’s legacy will be that he helped make the league more marketable than it’s ever been. If its status is in question, Stern and his cohorts on Fifth Avenue seemed determined to erase any lingering doubts.

The NBA reached a deal with Foot Locker that extends its status as an official marketing partner of the league. Foot Locker will continue to sponsor the Three-Point Contest, which it’s been since 2004 when the game was held at the Staples Center in Los Angeles. In addition to displaying its advertising campaigns on NBA TV and NBA.com, a new branded section of NBA.com called “Kicks of All-Star” will allow fans to engage with specialized content featuring the shoes worn by players during All-Star weekend.

All-Star Weekend, perhaps the league’s marquee event and second only to maybe the NBA Finals, takes place next year in New Orleans.

“We have enjoyed working with the NBA on a myriad of programs for more than 20 years, and we are excited to elevate our partnership,â€ said Stacy Cunningham, Foot Locker’s marketing chief. “We look forward to working together to create new and innovative events and programs that provide us with the opportunity to further engage with our customers.â€