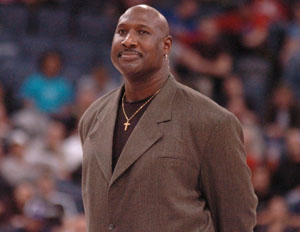 Darryl Dawkins, an NBA legend who played for the Philadelphia Sixers and the New Jersey Nets, died Thursday at Lehigh Valley Hospital-Cedar Crest, according to reports. He wasÂ 58.

Though reports indicate that an autopsy must still be performed to verify the official cause of death, Dawkins’ family has reported that he died after suffering a heart attack.

Dawkins had a 15-year professional basketball career and was nicknamed the Chocolate Thunder for his powerful slam dunks. He also had some success playing basketball overseas.

Dawkins was a pioneer as the first high school athlete drafted into the NBA in 1975.

“The NBA family is heartbroken by the sudden and tragic passing of Darryl Dawkins,” NBA commissioner Adam Silver said in a statement. “We will always remember Darryl for his incredible talent, his infectious enthusiasm, and his boundless generosity. He played the game with passion, integrity and joy, never forgetting how great an influence he had on his legions of fans, young and old.”

Check out this video from the NBA History channel of Dawkins’ top 20 dunks.