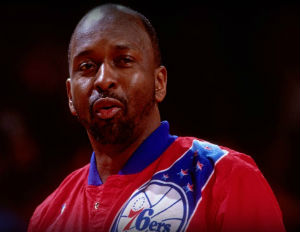 According to reports, Moses Malone, a three-time NBA MVP and Pro Basketball Hall of Famer, died Sunday in Norfolk, Virginia. He was 60.

Norfolk Police Dept. officials confirmed that he died in a Marriott hotel room in the Hampton Roads city. His body was discovered when he failed to report to the Still Hope Foundation Celebrity Golf Tournament, in which he was scheduled to play, and no foul play is suspected. The cause of death has not been confirmed by authorities, but local news in the area reports thatÂ Fellow Hall of Famer Calvin Murphy says he died from an apparent heart attack.

“We are stunned and deeply saddened by the passing of Hall of Famer Moses Malone, an NBA legend gone far too soon,” NBA commissioner Adam Silver said in a statement. “Known to his legions of fans as the ‘Chairman of the Boards,’ Moses competed with intensity every time he stepped on the court.

Malone made history as the first player to go straight into professional basketball out of high school, signing with the Utah Stars of the American Basketball Association in 1974. He then played with the Spirits of St. Louis, and moved on to the Buffalo Braves after the 1976 ABA-NBA merger.

He also played for the Rockets, Philadelphia 76ers, Milwaukee Bucks, Washington Bullets, Atlanta Hawks and the San Antonio Spurs. He was named one of the NBA’s 50 greatest players, was the Finals MVP in 1983, and led the 76ers to the title.

Friends and fans took to social to offer their condolences and remember the legend’s legacy:

I'm stunned to hear that my friend, Moses Malone, has passed on. He was the epitome of competitive energy and class.

You had the whole city of Philly on your back. Rest in Paradise. #MosesMalone pic.twitter.com/eIdQTFUsQR

Moses Malone I will miss you The best of the best God Bless https://t.co/oP0oGhn7df