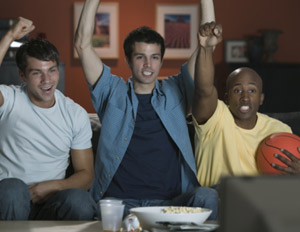 With Palace Grill being located four blocks away from Chicago’s United Airlines Arena, nights that would have been packed and cheering on Derrick Rose and the Chicago Bulls are just not there. Owner Peter Lemperis had to tell his workers there would not be overtime until the Bulls started playing again. “It hit us hard,â€ he explains. “I installed three new 37-inch flat screen TV’s in expectation of the season starting on time.â€ Unfortunately, people will not be able to watch them until Christmas day when the abridged season starts. A fan himself, Lemperis is looking forward to the season beginning and being able to give his employees more work, especially in light of the country’s current economic state.

Though Wendy McLean, CEO and founder of Brooklyn, NY’s Denim Lounge, is not a typical sports fan; she has been anticipating hearing news of when the NBA lockout would end. “We usually have sports nights around the football and basketball games,â€ she says. “We kept it going for a while, but without the NBA to keep it consistent, we eventually stopped them altogether.â€

As a result, McLean had to let go of two bartenders and a security guard. However, she is enthusiastic about the season starting again at the end of the month. Though she usually closes the popular Bed-Stuy locale on Christmas day, she plans to have a large “Grand Openingâ€ event to celebrate the NBA’s return.

Small business owners across the country share their concern for the economy overall. For many, the resolution of the NBA lockout does not just mean that fans get to watch their favorite players compete on the court once more, it’s an integral part of the financial puzzle for those entrepreneurs in the restaurant and bar business. Regardless of religion, they’re all looking forward to a very merry Christmas and profitable 2012 based on the return of their much-missed basketball-related income–as well as the players. “The only vice I have is that I’m addicted to sports,â€ says Thomas. “I never thought I would miss guys, but I’m a Kobe fan and I actually really want to see him play again.â€