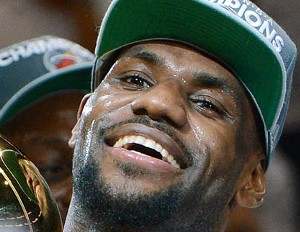 LeBron James, the NBA's best player, is a champion, which is excellent news for the league's ticket sales.

The Brooklyn Nets, Philadelphia 76ers, Minnesota Timberwolves, Charlotte Bobcats and the Los Angeles Clippers are among the NBA teams that have seen the greatest increase in ticket sales before the league opens play Tuesday night with a trio of marquee games in primetime.

Last year’s overall average league attendance wasÂ 17,306 amongst the league’s 30 teams. But the increase in season ticket sales in the Philadelphia, Minnesota and Charlotte markets is due to aggressive pricing models, attractive non-basketball related perks and other innovative and integrated marketing plans.

Brooklyn’s new stadium, the Barclays Center, drove much of the excitement for a Nets franchise previously in a perpetual dismal state following multiple Finals appearances in the early aughts. The Nets also drove sales by excitement over the signings of guards Deron Williams and Joe Johnson.

The on-court product continues its emergence this year as the most dynamic in all of professional sports. The 2012-13 season is shaping up as one of the most highly anticipated in years, with at least six teams said to be in serious contention to dethrone the NBA champion Miami Heat. Led by perennial All-Stars LeBron James and Dwyane Wade, the Heat will open the season Tuesday night against the revamped Boston Celtics, who took the Heat to a Game 7 in last year’s Eastern Conference Finals.

The Heat will receive their championship rings during a pre-game ceremony.