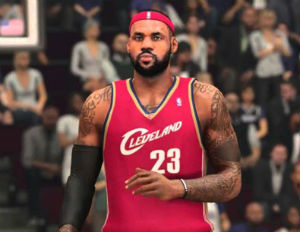 Game screenshot of James and his ink (Image: nba2k.wikia.com)

On Monday, Feb. 1, tattoo company Solid Oak Sketches filed a lawsuit against Take-Two Interactive and Visual Concepts, makers of the hit video game franchise NBA2K. Solid Oak Sketches claims the game graphically represents tattoos that they own the rights to, on NBA players without its permission.

According to ESPN, the tattoo company took the claim to Manhattan federal court, claiming that particular tattoos depicted on players in the recent game NBA2K16 was in fact the company’s copyrighted work.

In 2015, Solid Oak Sketches got the copyrights to a lot of the tattoos and had written letters to the video game company to set up a deal so the tattoos could be used in the game, offering Take-Two a license for the tattoos for $1.1 million.

The 8 infringed-on designs includeÂ butterflies on Kobe Bryant’s arm, and a child’s portrait and script scrolls with clouds and doves on LeBron James’ forearms.

Darren Heitner, co-representing the plaintiff, stated, “It’s clear that they knew that this was something that was to be negotiated,” regarding the recent lawsuit.

This is not the first time a tattoo artist has sued a video game maker for using his or her work on an athlete without permission. For portrayal of UFC fighter Carlos Condit in THQ’s “UFC Undisputed” game, tattoo artist Victor Escobedo won $22,500 for his lion tattoo, after originally asking for $4.1 million. Since 2014, when NFL’s ‘Madden’ began to incorporate tattoos on players in games to look more realistic, tattoo artists for athletes have started to pay more attention to their rights. And for good reason. Intellectual property attorney Tim Bradley said, “So that could be paper, or film, or what have you … and you automatically own the copyrights in that. While you might own the copyright to your design, the recipient still owns their body … so they own the copy of your work, and so the thorny question comes in … What happens when additional copies are made?”