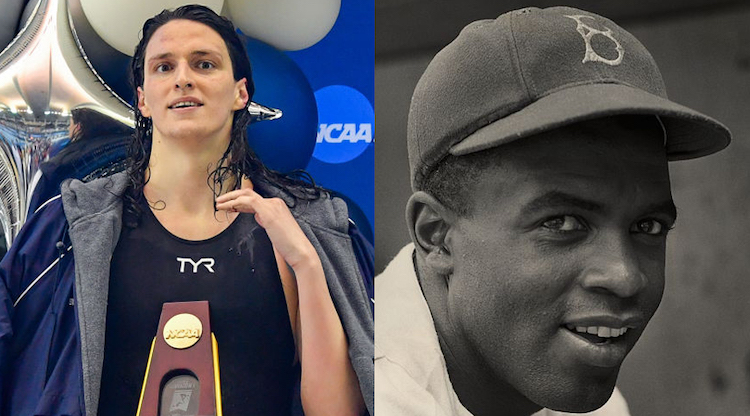 Trans athlete Lia Thomas has been crushing her female competitors and shattering swimming records just two years after competing as a biological male.

Amid the ongoing debates on whether or not trans women should be allowed to compete in female sports, one op-ed writer at NBC News believes Thomas should be “celebrated” for being a “trailblazer” like the late baseball legend Jackie Robinson.

“Opinion: We should be celebrating Lia Thomas the way we celebrate Jackie Robinson,” NBC tweeted while sharing the article.

“Thomas, as the first transgender athlete to win a Division I NCAA championship, deserves to be placed among the other firsts,” Cooky wrote in the piece published on March 21. “She should be embraced in the history of progress that sports represent and recognized as the trailblazer that she is.”

Cooky went on to shame critics who don’t agree with trans women competing in female sports, saying the condemnations “are not well-founded” and lack “scientific evidence” that points to “a direct link between testosterone athletic performance,” Fox News reports.

Cooky accused the critics of showing “discrimination of athletes like Thomas.”

“Change in sports doesn’t happen overnight, nor is it linear. Major professional sports leagues like MLB and the NFL resisted racially integrating their player rosters… Today, athletes like Jackie Robinson are celebrated as ‘breaking the color barrier’ in sports, although that narrative often requires sanitizing, simplifying or rewriting a more complex, nuanced and contradictory history,” Cooky wrote.

While Cooky was making a call toward inclusion, her op-ed’s headline sparked outrage online, with many blasting Cooky for comparing Thomas to the likes of Jackie Robinson, Daily Mail reports.

“This isn’t an advancement of women’s sports or sports at all,” one critic tweeted. “It’s the advancement of uncommon sense and obsession with some moral superiority based on ‘progressive’ value.”

“‘Like we did Jackie, come on now,’ added someone else.”

Back in January, one of Thomas’ teammates revealed claims of Thomas comparing herself to Jackie Robinson.

“She compares herself to Jackie Robinson,” the teammate, who asked to remain anonymous, told the Washington Examiner. “[Lia] said she is like the Jackie Robinson of trans sports.”