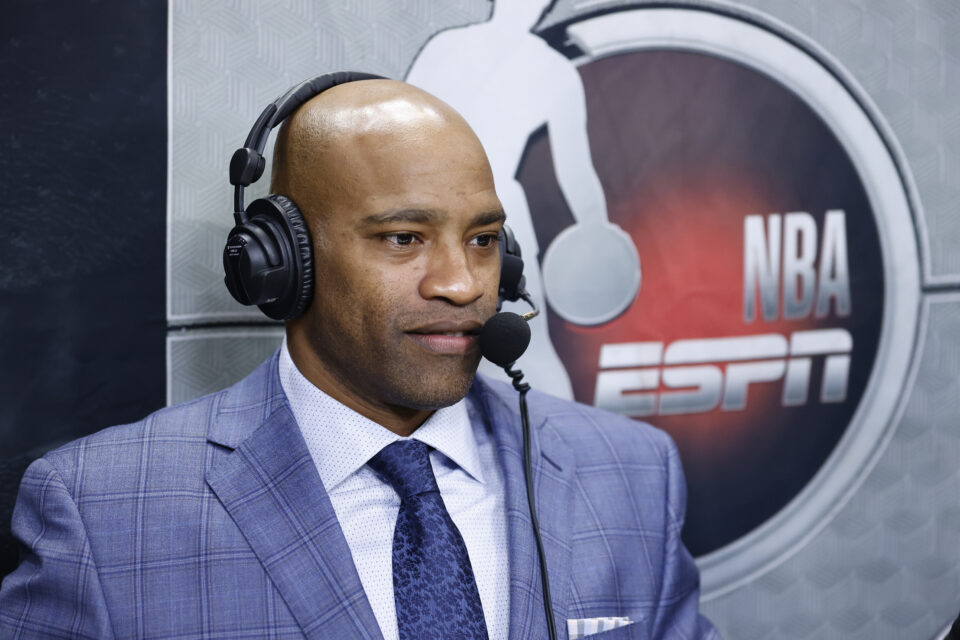 MIAMI, FLORIDA - OCTOBER 15: ESPN commentator Vince Carter looks on prior to a preseason game between the Miami Heat and the Boston Celtics at FTX Arena on October 15, 2021 in Miami, Florida. (Photo by Michael Reaves/Getty Images)

Former NBA star Vince Carter had his home burglarized and robbed of nearly $100,000 while his frightened wife and kids hid inside a closet.

Police responded to a burglary call in northwest Atlanta just before midnight Sunday, WSB-TV reports. Carter’s wife, Sondi, was home lying in bed with her sons when she heard someone rummaging through their belongings in different rooms.

The frantic mother grabbed her boys and hid inside a closet while calling 911. When cops arrived, they saw a masked man wearing all-black clothing fleeing the scene.

Police said the masked suspect made it to a nearby SUV and got away. Authorities located a large amount of $100 bills spilled on the ground,” along with a gold Desert Eagle pistol and a black Glock 26 pistol with an extended magazine, the police report said.

The firearms and cash were scattered around the ground outside the 10,000-square-foot (900-square meter) home in Atlanta’s affluent Buckhead neighborhood.

The former pro athlete told police the cash came from a bag he kept stored inside his closet, Fox News reports.

Carter’s wife and children were not hurt during the home invasion but a front window inside the home was smashed, as noted by the NBA. Multiple rooms were in disarray and a gate at the top of the stairs had been broken off its hinges.

Carter played 22 seasons in the NBA before retiring with the Atlanta Hawks in 2020. The NBA alum purchased the home for nearly $7 million in August 2020 and works as an analyst for ESPN.

Police are on the search for the suspects and lifted a fingerprint to identify the thief. They also collected surveillance video from cameras on the property.