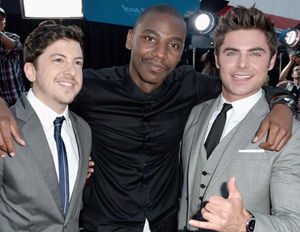 “Did you meet Jerrod?â€ Zac Efron asks this question in a room full of journalists. He’s sitting at the edge of a table next to his co-stars in the new movie “Neighbors,” Seth Rogen and Rose Byrne, smiling saying, “He’s just … ”

“Endlessly winning,â€ Rogen chimes in, finishing Efron’s sentence before Zac jumps back adding, “You just wanna be around him. He’s got a really funny outlook. It’s positive, but he’s um … Witty. What’s wrong with Jerrod?â€

“Nothing,â€ Rogen answers, shaking his head back and forth. “He’s amazingly driven and funny and sweet, and literally one of the nicest people I’ve ever met in my entire life.â€

“I was a fan of his standup,â€ Rogen continues, as Byrne nods in agreement. “We were excited to get him in the movie in some capacity. I feel like he’s gonna be very … Like, I know he’s doing a HBO special that Spike Lee is directing. So … Like he will be very, very famous soon.â€

Huge words coming from one of Hollywood’s most powerful funnymen of the moment, about a young brother from North Carolina that some are calling “the next Jamie Foxx.â€ Jerrod Carmichael’s comedy has been described as being a casual, sort of sarcastic, laid back ode to Seinfeld. Using a simplistic knack for talking smack about the everyday moments in life that are often filled with absurdity, Carmichael is now headed to Hollywood’s “Itâ€ list. With a NBC TV pilot based on his life, buzzing among those in the know, Carmichael’s HBO special directed by Spike Lee was confirmed weeks before his first film “Neighbors” hit theaters.

Read the rest of this exclusive interview via The Shadow League…