Hero for the World: The Death of Nelson Mandela [Obit] 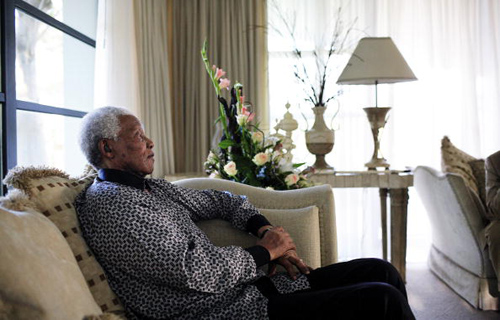 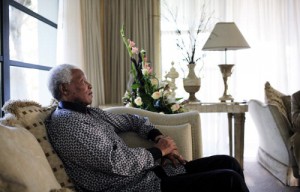 Among all the great individuals who really did change the world during the past century, few lived as diverse a story as Nelson Mandela.

Revered as the father of the “Rainbow Nation” — a South Africa revolutionized by racial equality — Mandela died today on December 5th, 2013.

He was born in 1918 into a country rich in gold, platinum and diamonds, where the black majority had been savagely oppressed by the white minority since 1652. Mandela was the first member of his family to be educated in a school and the first black lawyer to set up a South African law practice. He came of age as an activist in the struggle against the racist apartheid system of extreme injustice. He vigorously participated in the African National Congress (ANC), but reaching his peak years of power and influence at age 46, the government convicted him of treason and locked him up in prison in 1964.

Amazingly, his fame as a freedom fighter blossomed during the 27 years he was behind bars. Mandela secretly wrote his autobiography, Long Walk to Freedom, while incarcerated. The manuscript had to be smuggled out of the the infamous Robben Island Prison. He attained iconic stature, recognized as South Africa’s number-one black leader as the anti-apartheid movement picked up momentum.

Following his release from jail in 1990, he achieved what previously had seemed impossible. He poured his energy into continuing the work he and others in the banned ANC had done for over 30 years. Chosen ANC president, he successfully led the anti-apartheid movement in multi-party negotiations to bring political power back to the majority of the population. By his advocating black/white reconciliation instead of violent revenge, Mandela was awarded a 1993 Nobel Peace Prize shared with the white head of state, F.W. de Klerk. In 1994, Mandela won the presidency in his nation’s first free and fair election. Later, as he grew into old age, he earned deepening global respect as one of the wise men of the Earth.

“Nelson Mandela was an extraordinary man who changed the entire world with an unwavering commitment to justice and peace,” said Graves earlier today, upon hearing the news of Mandela’s passing. “His quiet dignity, grace, sacrifice, and forgiveness will always be admired. His life serves as a beautiful inspiration to millions of people, and he will forever remain a personal hero of mine. May God bless Nelson Mandela and his family.”

“I think he’s a hero for the world,” said President Barack Obama of Mandela in Dakar, Senegal, on June 27, 2013. “If and when he passes from this place, one thing I think we’ll all know is that his legacy is one that will linger on throughout the ages.”

During his visit to several African nations, Obama recalled how he had joined the anti-apartheid movement as an undergraduate student at Occidental College while Mandela was still in jail.

“I was inspired by what was taking place in South Africa,” said Obama, having read Mandela’s writings and speeches. The youthful Obama had recognized Mandela’s belief in treating people equally and his willingness to sacrifice his life for that belief.

Obama said he was especially impressed by Mandela’s efforts to reconcile blacks and whites during South Africa’s transition from apartheid to being a Rainbow Nation.

“For him to say, I embrace my former captors and my former oppressors, and believe in one nation and believe in judging people on the basis of their character and not their color . . . gave me a sense of what is possible in the world when righteous people, when people of goodwill work together on behalf of a larger cause,” said Obama in Africa.

Acknowledging a fellow leader who had achieved a historic first, Mandela wrote to Obama after the U.S. presidential election of 2008.

“Your victory has demonstrated that no person anywhere in the world should not dare to dream of wanting to change the world for a better place,” Mandela wrote. “We wish you strength and fortitude in the challenging days and years that lie ahead. We are sure you will ultimately achieve your dream making the United States of America a full partner in a community of nations committed to peace and prosperity for all.”

In a June 2004 interview with The Guardian, a British newspaper, former U.S. President Bill Clinton said Mandela’s wisdom had helped him survive 1998, when his detractors in Washington, D.C., had attacked him with impeachment and a special prosecutor.

“He told me he forgave his oppressors because if he didn’t they would have destroyed him,” Clinton remarked. “He said: ‘You know, they already took everything. They took the best years of my life, I didn’t get to see my children grow up. They destroyed my marriage. They abused me physically and mentally. They could take everything except my mind and heart. Those things I would have to give away and I decided not to give them away.’ And then he said: ‘Neither should you.’ And he said when he was finally set free he felt all that anger welling up again and he said, ‘They’ve already had me for 27 years … I had to let it go’. You do this not for other people but for yourself. If you don’t let go it continues to eat at you.”

Imprisonment was the transformative event in Mandela’s life that didn’t kill him, but made him stronger.

In an interview published in 2001, Oprah Winfrey asked Mandela to explain a comment he had made: that without prison he would not have accomplished his most difficult task of changing himself. Mandela answered, “Before I went to jail, I was active in politics as a member of South Africa’s leading organization — and I was generally busy from 7 A.M. until midnight. I never had time to sit and think. As I worked, physical and mental fatigue set in and I was unable to operate to the maximum of my intellectual ability. But in a single cell in prison, I had time to think. I had a clear view of my past and present, and I found that my past left much to be desired, both in regard to my relations with other humans and in developing personal worth.”

The ultimate value of Mandela’s jail time was addressed by Bill Clinton in a 2007 speech hosted by the Nelson Mandela Centre of Memory. There Clinton described Mandela’s development as a practical leader: “He didn’t spend all that time in prison thinking about his prose, he spent his time thinking about how to make deals and get things done.”