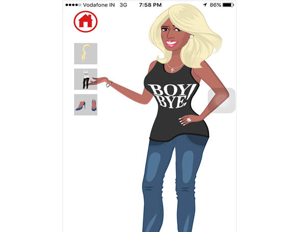 The Real Housewives of Atlanta star and TV personality NeNe Leakes, announced the launch of her new iOS app, “Nene Leakes: The App for iPhone and iPad.â€

The app features NeNe-inspired emojis with some of her catch phrases such as “Bloop,” “Close Ur Legs to Married Men,” “Girl Bye” and more.

Users also have access to stickers and there is a game element, the Dressing Room features. In the dressing room, users can dress NeNe in different hairstyles, outfits, shoes, and accessories.

“We are extremely happy to have partnered with Nene and are honored to have been selected to build her new Mobile App,â€ said Lonnie Sapp, president, and CEO.Â  The company is based in Atlanta, GA, and specializes in mobile app development.

The app is available now on the App Store for $1.99. It’s supported on iPhone and iPad and requires iOS 8 or later. A version for Android is slated for later this month.

Having one’s likeness in an app has become de rigueur for recognition as a reality TV star or top media personality.

Amber Rose recently teamed up with Zoobe, a character voice-messaging app. The company created a 3D likeness of Rose in the app. With her 3D character and the Zoobe app, fans can express themselves and communicate as Amber Rose in the digital world.

Kim Kardashian was the first reality star to realize the enormous money-making potential of branding her image through emojis and apps.

Last year, her Kimoji app reportedly ‘broke’ the App Store due to traffic congestion from the thousands of concurrent downloads.

Other celebrities with emoji apps include Wiz Khalifa, Fetty Wap, The Game, and even Drake’s father, Dennis Graham.