Kidd Will Get Number Retired by Nets Amid Ownership Stake Talk 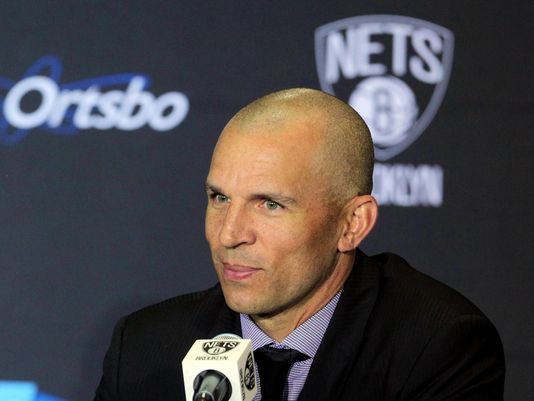 Jason Kidd was named head coach of the Nets this past spring.

The Brooklyn Nets have announced that Jason Kidd will have his number retired at a ceremony on Oct. 17 during a regular season contest against the Miami Heat.

Kidd was named head coach of the Nets after announcing that he was retiring after his last year playing with the New York Knicks.

Nets owner Mikhail Prokhorov intimated that he was excited about the prospect of the next phase of Kidd’s career.

“My warmest congratulations to Jason as we commemorate his outstanding career as an NBA player and his unparalleled contribution to the Nets franchise,â€ he said in a statement. “As one chapter closes, another will soon be written and I know that we are all looking forward to Jason’s continued successes.â€

General manager Billy King, recently signed to a contract extension this past spring, said he thought Kidd deserved the honor.

“This honor is richly deserved,” King said. “Jason is firmly established in the Nets’ record books as the greatest player in the team’s NBA history, and the retirement of his #5 is a fitting conclusion to his legacy as a Nets’ player.”

Coincidentally, the news comes as Kidd is rumored to buy an ownership stake in the team — the approximately 1.6 percent that once belonged to longtime friend Jay Z.

We’re told Kidd will take over Jay’s .067 percent (1/15th of a percent) stake in the team for about $500,000. The move comes as Jay was forced to sell his Nets shares over a conflict of interest after he started a sports agency, Roc Nation, signing clients including Yankee Robinson Cano and Oklahoma City star Kevin Durant. A source told us, “Other owners want to give Jason a part ownership of the team, and urged Jay to sell his shares to him.â€
Amazingly, Jay was introduced to the team in 2003 by Drew Katz , the son of one of the Nets’ principal owners, after Kidd, then the Nets’ marquee point guard, suggested the music mogul buy the team.

The move has yet to be confirmed by either the Nets or Jason Kidd.

“This is a very humbling honor and one that I will always cherish,” said Kidd. “There can be no greater recognition of an athlete’s time with any team than to have his number retired, and this gesture by the Nets organization validates a very significant portion of my career that was spent as a player with this franchise.”