New Chevy Malibu Could Help Save Your Life 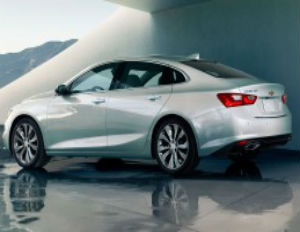 Safety matters just as much as price when it comes to choosing a car. Some vehicles are safer than others, according to the Insurance Institute for Highway Safety,Â which compiles an annual list of the safest cars based on a series of crash tests. Buyers who are in the market for a mid-size sedan loaded with safety features should check out the Chevrolet Malibu.Â General Motors recently introduced the all-new 2016 Chevy Malibu – a completely re-styled mid-size sedan engineered to for greater efficiency, re-analyzed technology connectivity, and more advanced safety featuresÂ –Â at a sticker price of $22,565.

Pedestrian detection with automatic braking, lane-keeping assist, lane-departure warning, blind-spot monitoring, forward-collision warning with automatic braking, rear cross-traffic alert, front and rear parking sensors, automatic parking, automatic high beams, and adaptive cruise control are all available. The mid-size sedan is not only good in the event of an accident, but also good at avoiding one.

What’s more, the new Malibu flaunts its PIN-protected Teen Driver feature in the panel setting menu, which will notify parents of the car’s top speed, distance traveled, and every time an active safety device was triggered. Parents can review a “report card” –Â driving information that the vehicles collects. Teen Driver also has a precautionary feature that won’t enable radio play if a seat belt is not being worn. Parents can even set an audio volume limit for the radio. Teen Driver, which uses an activated key, was created to address some the issues around teen fatality rates. Data shows that in more than half of teen fatalities, they weren’t wearing seat belts. Motor vehicle crashes are the number one cause of death for teens, according to the automaker, which makes teens an at-risk group of drivers.

“Teen Diver is a really good tool to help your teen drive more responsibly,â€ says Crystal Windham,Â who is among a handful of black auto designers. As director of North American passenger car design for GM, Windham oversees the interior design of the acclaimed Chevrolet Malibu mid-size sedan.

Inside the Malibu, the Premier and Hybrid models appear luxurious with rich leather, ventilated seats, and quiet rides. The Malibu grew 2.3 inches longer and added 3.6 inches to its wheelbase. That helped create a more comfortable and roomy interior with an additional 1.3 inches of rear legroom. The bigger size did not mean more weight; in fact, Chevy has cut hundreds of pounds out of the Malibu.

“I’m responsible for making sure the foundation of the interior set is from a visibility and spaciousness standpoint,â€ says Windham. “We made sure that the instrument panel was down as much as possible. We pushed the surfaces forward to make it easier for the driver to get in and out of the car. One of the big wins was making the panel one seamless piece.â€

Windham integrates beauty and style with the car company’s trademark function and engineering to create interior designs that customers notice – and love. “We are integrating technology in fresh, new ways,â€ she notes, referring to various functions that are accessible via a new optional eight-inch MyLink infotainment touch screen that is offset at the top. With the bigger screen – a seven-incher is available on lower trims – you get navigation, as well as a slightly updated version of MyLink with a faster processor.

Windham also is quick to point out that the car can be a mobile hot spot with 4G connectivity, Apple CarPlay, and Android Auto. “At the core of what Chevy likes to do is to bring together exacting design with great technology.â€ She began her career at GM 21 years ago. She became the first African American female director in GM’s design division’s history in November 2008 and has since spearheaded several award-winning passenger car interiors, including the highly acclaimed 2014 Chevrolet Impala. She leads a group of designers, sculptors, and engineers who create the shape and overall environment of the vehicle.

“I look at the interior of your car as your second home. People spend a lot of time inside their vehicles,â€ says Windham. So, “I want the interior to be an exciting design that soothes you and welcomes you. The technology has to be great, but that interface has to be simple and intuitive.â€

Chef Digby Stridiron is Making St. Croix the Culinary Destination of the Caribbean