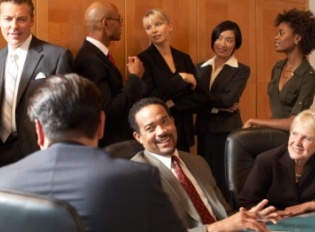 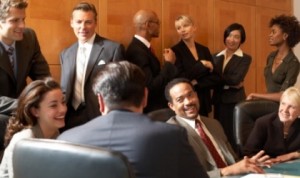 The law allowed Smith’s firm, (No. 7 on the BE ASSET MANAGERS list with nearly $5 billion in assets under management), to land a contract last fall to provide advisory services to the U.S. Treasury Department, Smith says. Smith Graham, through a partnership with Boston-based State Street Global, is advising the Treasury on the management of about $150 billion in mortgage-backed securities, Smith says. “Our goal is to spend more time in Washington and work with these offices, bring more business to the firm, create new opportunities and show them our value added proposition,” he says.

The Treasury is among about 30 agencies that oversee the financial system, including the Federal Reserve, the Federal Deposit Insurance Corp. and the Securities and Exchange Commission, required by the Dodd-Frank Wall Sreet Reform and Consumer Protection Act (signed into law by President Obama last July) to open an Office of Minority and Women Inclusion (OMWI). The offices are charged with tracking diversity within and the pool of contractors who sell the government goods and services.

But the law also has some skeptical observers. Among their concerns: Will the covered agencies actually be held “accountable” to comply with the law, and will it foster a quota system that could discriminate against firms not minority or women owned?

Joset B. Wright, president of the New York-based National Minority Supplier Development Council, one of the nation’s top business member groups, described the intent of the Frank-Dodd Act as “laudable.”

However, she adds, it appears that this requirement would duplicate the functions of the U.S. Department of Commerce’s Minority Business Development Agency and the Small Business Administration.

“The true value in such a provision will be in its enforcement to insure equal access to contracting opportunities for the Asian, Black, Hispanic and Native American suppliers that are certified by NMSDC,” Wright says.

Mark Calabria’s, an economist and director of financial regulation studies at the Cato Institute, a Washington, D.C.-based think tank, said the law requires that covered regulators provide an annual report to Congress on matters like how much in total contracts they’ve awarded and what percentage of their total contract (activity) is going to minorities and women.

But Calabria also is concerned that the law could cause agencies to focus more on reaching an undefined quota instead of finding the best qualified contractor.

He said the firm provides the regulator a review of the accounting and regulatory practices of the banks the FDIC supervises.

Though Appiah said his firm done work for the FDIC since the 1990s on smaller scale, it has never such a sizeable contract with the regulator.

The nation’s 12 Federal Reserve Banks, stretching from New York to Chicago to San Francisco, have opened OMWI offices, says Bill Cooper, vice president and deputy director of diversity and inclusion at the Federal Reserve Bank of Richmond. He said the banks will look for minority and women contractors to provide many services, including janitorial, transportation, food, office supplies and information technology services to name a few.

In addition to procurement, Cooper said the law requires the Federal Reserve to be inclusive of minority and women contractors also in the areas of workforce (hiring), retention and community outreach. Each of the Fed banks have an OMWI link on their web sites, allowing potential contractors to find jobs and make connections.

“We want to make sure that we have the appropriate processes in place so that they have their greatest potential for success,” he says.