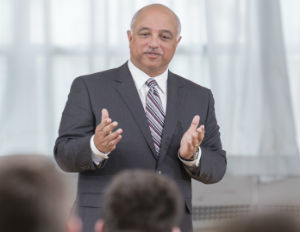 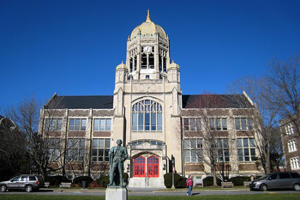 In its diversity statement, Muhlenberg acknowledges the “benefits, tensions and intersectionsâ€ that are often part of affirming the value of diversity. But the college believes that such tensions can lead to teachable moments that inspire the Muhlenberg community to an “ongoing, ever-deepening integrity.â€ Williams says the best students know that diversity is the future. Not only is the U.S. itself becoming more diverse–by the year 2020 whites will no longer comprise the majority–but the world is more interconnected than ever. “To be successful, students need to be able to engage with the world around them and navigate different cultures,â€ both here and abroad. Cross-cultural navigation is becoming as important as the development of critical thinking skills, quantitative fluency, and the ability to reason and shape an argument.

With his business and entrepreneurial background, it’s not surprising that Williams is approaching the preparing of students for the workplace in an innovative way. He’s developing aÂ “network paradigmâ€–in which not only students, but faculty, alumni, even parents are called on to contribute to the institution’s advancement–and not necessarily financially. “Students don’t just go to college to ‘get’ an education,â€ Williams says. “We want every member of the Muhlenberg Diaspora to be a potential source and consumer of value and to participate in the value exchange.â€ Williams says mentorship will be a significant part of the network and will be developed around the best available research on mentoring. “There is a way to do it and a way not to do it,â€ he says.