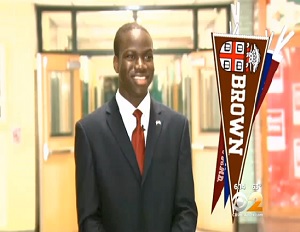 It’s that time of year again when high school seniors are narrowing down their options and deciding which college will be the school of their choice. While a few students may still be waiting on pens and needles to see if they’ll be accepted into their top school, one hard working student, Harold Ekeh, has already been accepted into all eight Ivy League schools.

Ekeh, who is a salutatorian at Elmont High School in Long Island, New York, arrived to America eight years ago with his family from Nigeria. From the first day in his community, he volunteered on social justice campaigns, mentored students, got involved with sports, and was elected to Elmont’s homecoming court and honor society. When he wasn’t active in extracurricular activities, the 17-year-old spent most of his time studying complicated bio-chemistry experiments and says that his goal is to one day find a cure for Alzheimer’s, a disease that his grandmother was diagnosed with.

“Kids would say, ‘I want to be a firefighter or a police officer or a superhero.’ I would say I want to explore the human body, what makes us who we are,” CBS New York reports Ekeh saying. “I would like to be a neurosurgeon when I grow up.”

While the young scholar is leaning towards Yale University, he says he is humbled by his acceptance into all eight Ivy League schools and plans to take a trip this week to visit the other prestigious universities.