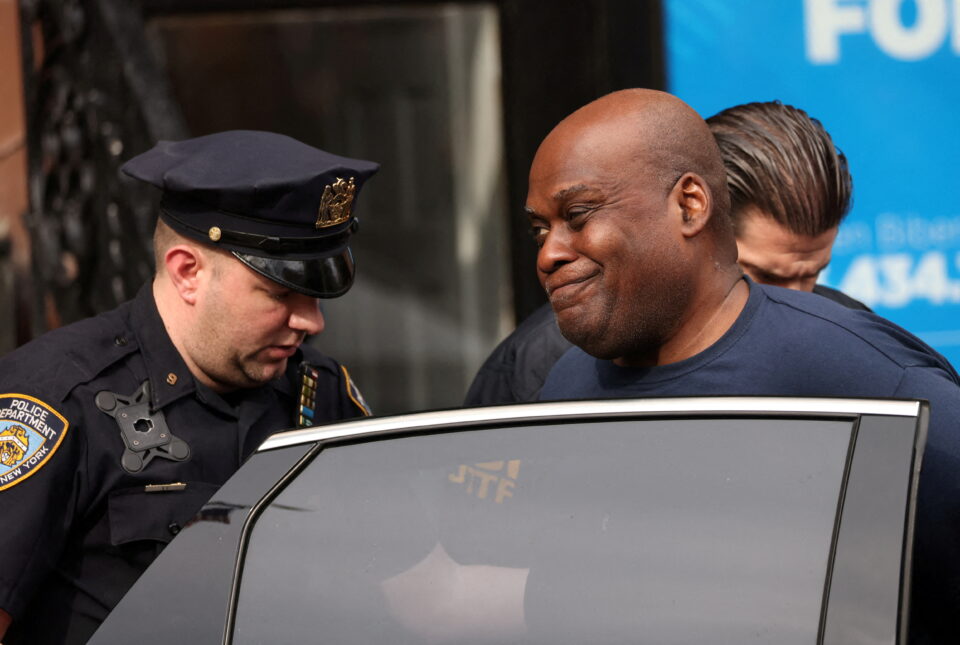 NEW YORK (Reuters) – The man suspected of setting off smoke bombs and spraying gunfire inside a New York City subway car, injuring 23 people, was arrested on Wednesday on a federal charge of violently attacking a mass transportation system, capping an around-the-clock manhunt.

Frank James, 62, was taken into custody in lower Manhattan, about 8 miles from the scene of Tuesday’s assault, after authorities determined his whereabouts with the help of tips from residents, some of whom posted sightings on social media, police said.

James was arrested 30 hours after an attack that erupted during the morning commuter rush as the Manhattan-bound N line train was pulling into an underground station in Brooklyn‘s Sunset Park community, renewing fears of violence in the city’s subway system.

“My fellow New Yorkers, we got him. We got him,” Mayor Eric Adams told a press conference announcing the arrest. “We’re going to protect the people of this city and apprehend those who believe they can bring terror to everyday New Yorkers.”

James, a New York City native with recent addresses in Philadelphia and Wisconsin, had nine prior arrests in New York and three in New Jersey, according to the New York Police Department (NYPD).

A 10-page criminal complaint filed by federal prosecutors on Wednesday in U.S. District Court in Brooklyn charges James with a single count of committing a terrorist or other violent attack against a mass transportation system. If convicted, he could face life in prison, officials said.

He was expected to make his first court appearance on Thursday, the U.S. Attorney’s Office in Brooklyn said.

James is accused of setting off two smoke bombs inside the subway car moments before opening fire on fellow passengers with a semi-automatic handgun. The pistol, purchased in 2011, was later recovered from the scene, along with three extended-ammunition magazines, a hatchet, some consumer-grade fireworks and a container of gasoline, according to authorities.

Police said 10 people were struck by gunfire, five of them listed in critical but stable condition on Wednesday. Thirteen others were injured in the frantic rush to flee the smoke-filled train. All of the victims were expected to survive.

The attack marked the latest burst of violence that has plagued America’s largest metropolitan transit system, and posed a new challenge for Adams, who has tried to halt declining ridership during the coronavirus pandemic and ensure public safety.

James was apprehended in Manhattan’s East Village neighborhood after he was spotted by onlookers who recognized him from wanted posters and relayed his location to authorities.

“I said, ‘Oh my God, this is the guy,'” one bystander, Zack Dahhan, told reporters of his encounter with the suspect before he helped alert police in a nearby patrol car.

“He had a bag and was walking on the sidewalk. He put the bag on the street. I saw a lot of people come behind him. I said to the people, ‘Please guys, please keep some space, this guy is going to do something,'” Dahhan recounted.

Authorities told reporters that an investigation was continuing into what James’ motive might have been. Their focus was partly on numerous social media messages and videos posted by him.

The NYPD said they initially linked James to the attack after finding keys to a rented U-Haul van left at the crime scene in Brooklyn‘s 36th Street subway station.

Attempts by Reuters to reach any of the phone numbers associated with James were unsuccessful.

In an interview with the New York Times, James’ sister, Catherine James Robinson, said he had “been on his own his whole life” and that she was surprised by the incident.

On Wednesday morning, with the gunman then still at large, New Yorkers went on with their daily commutes, saying the violence would not deter them.

“It was terrible. I was sad; I had to explain it to my daughter,” commuter Matthew Mosk said. “I was lucky I wasn’t on the train because I usually commute around that time.”

Ridership decreased during the pandemic to an average of 3.3 million trips per weekday last week from 5.5 million. New York has also seen a sharp rise in violent crime, including seemingly random attacks on the subway. In a number of attacks, passengers were shoved onto train tracks from platforms, one of them a Manhattan woman whose murder was seen as part of a surge in hate crimes against Asian Americans.