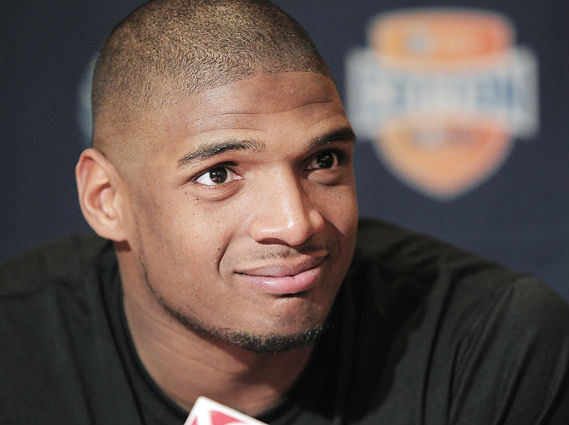 On Sunday, Missouri defensive lineman Michael Sam became the NFL’s most intriguing prospect, telling ESPN and the New York Times that he is gay. The news sent a shock wave throughout the sports world, as Sam is expected to be the first openly gay athlete to play in a major sport.

Last year, ex-NBA veteran Jason Collins announced he was gay. A free agent at the time, Collins was not signed by an NBA team, leaving many to wonder if Collins, now 35, had been discriminated against.

But Sam, 24, represents a dramatic shift in the country’s attitude about gays in sports: a young player who could have a potential impact in America’s most popular sport.

Twitter was abuzz with the news yesterday, and much of the reaction was overwhelmingly positive.

Michael Sam himself thanked supporters for their encouragement:

I want to thank everybody for their support and encouragement,especially @espn, @nytimes and @nfl. I am proud to tell my story to the world!

A couple of Missouri Tigers tweeted they knew about Sam’s sexuality:

Our coaches and players knew all along about this and noone said anything. Just show the amount of respect we have for our family.

We knew of his status for 5 years and not one team member, coach, or staff member said anything says a lot about our family atmosphere

@MikeSamFootball #respect bro. It takes guts to do what you did. I wish u nothing but the best

As did Jonathan Martin:

Hats off to you Michael Sam, that takes some guts #respect

Meet Michael Sam, my new hero. Bravo for courage. My kid will be wearing his NFL jersey, team be damned http://t.co/608jXDQxTX

CBS’ Pete Prisco tweeted something of an informal poll:

I asked a lot of players last summer about playing with a gay player. A handful said it would bother them. Most did not.

Even Prime Time says it’s time the NFL is ready for a gay athlete:

Michael Sam isn’t the 1st gay player in the NFL although he is the 1st 2 come out.#realtalk Let’s show him love like a family member. Truth

Jason Collins knows a little something about this announcement:

I can’t wait to cheer for whatever lucky team that drafts @mikesamfootball. Personally I hope he goes to my favorite team. The @Colts