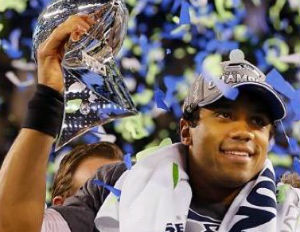 A recent phenomenon has emerged among NFL fans, and while the results have so far been unsuccessful – their willingness to part with additional money in support of their favorite teams and players is an interesting glimpse into the following the NFL has cultivated. Earlier this month, as the NFL announced it’s punishment regarding the New England Patriots and Tom Brady in the wake of ‘Deflategate’ – a ‘GoFundMe’ page was organized to foot the $1 million fine levied against the team; a campaign that has raised a little over $16,000 to date. Robert Kraft, the owner of the New England Patriots is according to the latest information available from Forbes, worth over $4 billion, and the New England Patriots rank second behind the Dallas Cowboys in revenue and profit.

Yesterday, a report surfaced that one Seattle fan has similarly created a ‘GoFundMe’ page titled “Keep Russell Wilson in Seattleâ€. The page, which has been active since May 12, 2015, has impressively managed to raise roughly $1400; although it has fallen a bit short of its $5 million goal.

As previously detailed, the 2013 Super Bowl champion and two-time Pro Bowl quarterback is entering the last year of a 4-year roughly $3 million rookie deal he signed with the Seattle Seahawks after being drafted in 2012. His rise to success since entering the league has been historic, and he’s reportedly set to earn a huge payday on his next contract, with some speculating that it could make him the league’s highest paid-player.

As part of aÂ detailed plan, Tim Pennoyer – the GoFundMe campaign organizer, outlines the following on the campaign page – “The premise is simple yet effective. Wilson needs money to stay in Seattle, we have money, therefore we give money to Wilson IF and only IF he signs. Let’s give Wilson the money to ensure that he stays where he is loved. The more salary cap we can free up, the more the Seahawks can go after more talent and we can get back to the Superbowl!â€

In a CNN report regarding the campaign for Wilson, it’s offered that it’s still unclear ‘…whether Wilson would be able to accept these donations under NFL rules, or whether the money would count against the salary cap that teams are allowed to spend on payroll…â€

One of the major hindrances between Wilson’s side and the Seahawks as they work to finalize the deal is the issue of the team salary cap, as Pennoyer mentions. Violating the NFL’s salary cap by going above can lead to penalties and fines for teams.

With that in mind, Pennoyer says, “I have a strategic plan to get money outside of the salary cap and get this money to Russell Wilson. I will be exploring setting up an LLC to effectively “sponsorâ€ Russell Wilson in the same manner that Bose or Gillette do. In doing so the 12’s [Seahawks’ fans] will free up to $5M for the Sehawks to go out and get more talent.â€

Finally, in the very realistic chance that the esteemed QB refuses the campaigns funds, the organizer already has plan B prepared – “In the event that the Wilson doesn’t accept the paycheck from his beloved 12s, a donation will be made to one of Russell Wilson’s favorite causes — The Seattle Children’s Hospital. Â All donated funds are to be used at the sole discretion of the campaign manager and subject to unforeseen limitations. I say this to be transparent as if we reach the $5M goal, I may need professional advice on the best route to get it to Russell Wilson.â€

One similarity between the two crowdfunded campaigns, for Wilson and the Patriots, is the seeming disparity between those funding, and those due to benefit, at least financially. To that point, CNN offers that ‘Ironically, Seahawks owner Microsoft co-founder Paul Allen, is theÂ richest owner in the NFL, and the team itself made an estimated $27 million profit in 2013…’.Â While neither campaign has met its goal, the dedication and financial support of the 1000+ fans donating to the two pages is certainly an endearing show of support, among other things.