From the NFL to Harvard Medical School 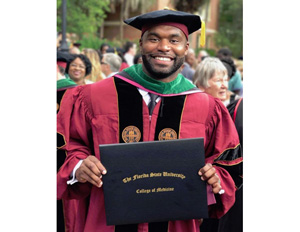 I know it’s almost sacrilegious to say this, but I don’t like American football—which, for some, is a religion. It’s a brutal game; the only one that, since 1995, has killed a middle school or high school student every year.

I don’t know about you, but dying or sustaining a serious, life-altering injury to play a game just doesn’t seem like fun to me. And—call me a spoilsport—but neither does ending one’s career with chronic traumatic encephalopathy, or CTE.  Add to that the sport’s culture of misogyny, violence, and flagrant waste in a world of extreme poverty—not to mention the poverty just in Dallas. How can anyone justify the building of a $70 million football stadium? And that’s not in reference to the stadium where the Cowboys practice for the NFL—that’s for a high school. After taking all this into consideration, I have to conclude that the game just isn’t for me.

Although I may not be a football fan, after reading about Myron Rolle, I’m now hopeful that someone, who has excelled at the sport and clearly loves it, can also help to make the game safer. At the least Rolle has football cred, so any warnings he would sound-off on would command respect.

From the NFL to Harvard Medical School

Next month, Rolle, a 6′ 2″ former safety with the Tennessee Titans and Pittsburgh Steelers will start the next phase of his career—by beginning his residency in neurosurgery at Harvard Medical School.

Rolle already has a master’s degree in medical anthropology, which he earned from Oxford University in England as a Rhodes Scholar. He is also probably the only man in the world that is a Rhodes Scholar, medical student, and former NFL athlete.

According to CNN, the future surgeon says he’s glad he’s been able to walk into his purpose.”I’m glad that I walked into something that was a smooth transition from football,” he said to CNN reporters.

You know the cliché people use when they’re describing something that isn’t very difficult? “It’s not brain surgery,” some say. Well, this is—or will be—literally the case for Rolle. The former football athlete will be putting on scrubs and operating on people’s brains. Though already a medical doctor, Rolle’s love of football and concern about its safety has seemingly had an influence on his choice area of study.

“The fundamentals [of the sport] have to be emphasized—tackling the correct way. Having the right equipment. Making sure that you don’t have very violent practices or contact practices,” Rolle told CNN reporters.

The news outlet also claims that Rolle’s areas of interest include brain injuries in sports and pediatrics. “I will tell you in person, ‘Yes, play, but be careful, be safe, and understand some of these things that need to go into it for you to enjoy it,'” he said.

Whether football can be played safely at all is unlikely, but Rolle is the man uniquely equipped to find out the answers.

Check out the below video, in which Rolle discusses his experiences as a medical student: