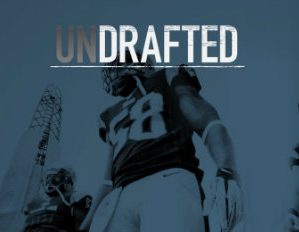 Sometimes you have to dream like you’ve never seen obstacles, and the men of the NFL Network’s UndraftedÂ television series are doing just that. Every year, thousands of NFL hopefuls leave their schools for a once in a lifetime chance to play in the big leagues with major football superstars.

UndraftedÂ follows the lives of six NFL hopefuls as they experience loss, tackle parenting, illness, and a variety of life’s other challengesÂ while being on the field. A college Pro Day is the most important–and potentially final–showcase the players will have to impress scouts and preserve their football lives. Jakeem Grant, still stung by his exclusion from the Indy Combines, seizes his opportunity at Texas Tech’s Pro Day, while Mike Bercovici battles jitters before his workout at Arizona State. Meanwhile, punter Swayze Waters prepares for big news about his wife’s pregnancy.

Chris “Kid” Reid, an actor and comedian from the dynamic group Kid -N- Play, lends his voice to tell the highs and lows of the featured athletes for the season.Â Reid states his love for not only football but relates Undrafted‘s themes to his entire career.

“I’m a big football fan regardless, and the show highlights the struggles of young men who are trying to achieve their dreams against naysayers. I feel like in terms of personal experience, I can even identify that in terms of my own career,” says Reid.

“If you look at the way the show is crafted, not just hardcore football fans will love it; even women can get into it. In particular, in terms of black athletes, a lot of times this is the ticket out in terms of the whole family. No disrespect, if some of these other cats don’t make it they have other options.” Reid explains.

Reid states that the overall theme of the entire show is hope and that you have to endure no matter the outcome. Hope is the one ingredient that each of the players on the show hasÂ and it keeps them going. One major success story of the show is Akeem Davis. Davis managed to be the only player during his season of the show toÂ join an NFL 53-man roster.

Click here to take a look at a prior clip from episode 4 of season 3: UNDRAFTED (Episode 4) Clip and Synopsis.