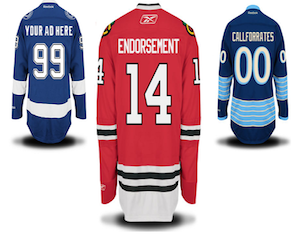 In an interview posted last Thursday at Sports Business Daily, NHL COO John Collins made an interesting statement pegged to advertisements within the sport.

Collins, 52, believes that ads could soon appear on NHL teams’ jerseys, saying “a sponsorship is coming and happening,” even though no details were offered. Countering that position was NHL spokesman Frank Brown who tried to calm growing concerns about the consumerization of the sport, saying in an email to CBC News Network, “This is not by any means a front-burner topic. The matter is not under formal consideration at the moment.”

The hype stems from how much money European professional hockey teams make, as the practice is already in place there, but none of the four major North American pro leagues allow for jersey sponsorship during the regular season. NFL teams are allowed to place advertising patches on their practice shirts, and the NBA is mulling over allowing ads on its jerseys as commissioner Adam Silver calls it “inevitable” within the next five years.

As professional sports leagues continue to find ways to increase revenue and diversify its dollars, the NHL is one of the few that is stepping outside the box and use non-traditional marketing to appeal to their consumers. In the interview, the chief operations officer of the NHL also noted that the NHL is testing technology that would allow the television broadcasters to replace ads on boards at arenas, digitally, and target their specific audience with the signage.