Not Just Fans, the Hockey Lockout is Hurting Small Businesses as Well 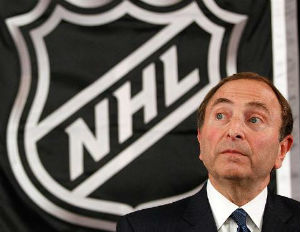 As the National Hockey League’s labor lockout continues, fans and players are not the only people directly affected. The dispute centers on how to divide the league’s revenue, which reached $3.3 billion last season, while honoring existing contracts. With the cancellation of over 400 games so far this season, bars, restaurants, sports apparel shops and other retail outlets near stadiums are feeling the loss of revenue.

Joe Kasel, owner of the Eagle Street Grille, is one business owner feeling the hurt from the NHL lockout. His restaurant/bar is located directly across the street from the Xcel Energy Center, and he’s had to lay off two-thirds of his employees since the beginning of October.

“When you build a business model around the Xcel Energy Center, home of the Minnesota Wild, and then suddenly that business isn’t there, that model doesn’t work anymore,” Kasel said.

He attributes the lockout for a significant loss in his revenue and for the resulting employee cuts.

Hotels are also feeling a direct effect of the lockout. The Hilton Hotel located directly across from the Bridgestone Arena in Nashville, sees “more than half of the visiting NHL teams stay there over the course of the season,” said Ray Waters, regional director for Turnberry Associates, which runs the hotel. He said those teams occupy 40 to 45 rooms per night, often on non-premium days.

“Sometimes those are two nights in the middle of January on a Tuesday night or a Wednesday night, which is really good business for us, ” he said. “When you get those big arch-rivals [playing], those fans do come, and not only do you pick up the business, you pick up a lot of fans.”

The Small Business Administration announced it has 14,000 counselors on hand to help businesses in 23 NHL cities. Karen Mills, the SBA administrator, even used hockey lingo in her news release.

“Small businesses are the backbone of our cities and towns and they should not have to sit in the penalty box,â€ she said. “SBA is prepared to coach small businesses until the crowds return.â€

Whether fans return after this lockout, the third in 20 years, remains to be seen. Many fans are expressing betrayal and no longer see a reason to support a sport that treats its fan base so carelessly.

“No other sport has this much turmoil. It just doesn’t make any sense,â€ wrote Travis Rechenbach, a seven-year season ticket holder in an e-mail.

Vince Piperni has had season tickets since 1998 and doesn’t know if he’ll be back.

6 Ways Businesses Can Maximize Use of SlideShare