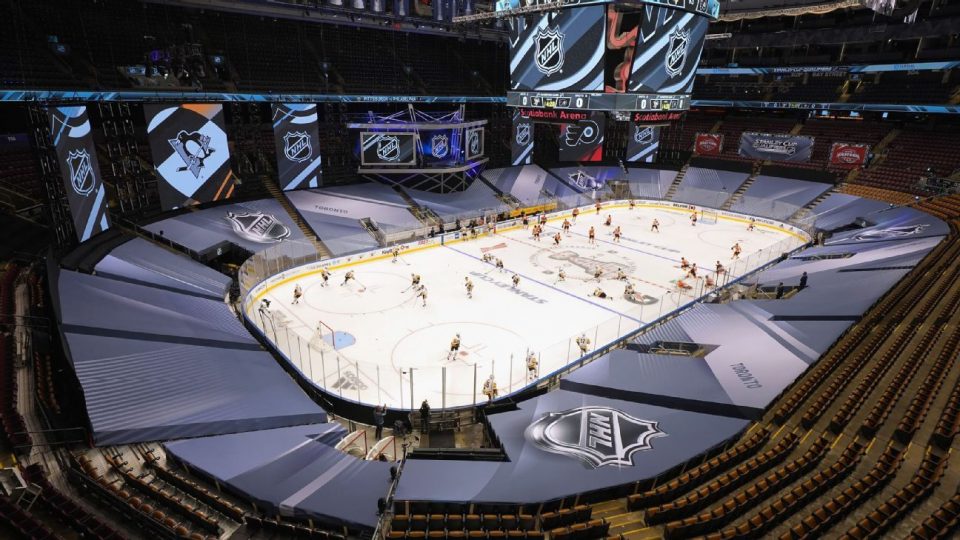 The NHL Playoff bubble at the Rogers Place in Edmonton, Alberta.

The New York Islanders vs. Philadelphia Flyers game in the Toronto bubble, as well as the Vegas Golden Knights vs. Vancouver Canucks matchup in the Edmonton bubble, will not be played, according to ESPN.

The league played all games as scheduled Wednesday, while all or several games were canceled in the NBA, MLB, WNBA and MLS, due to the death of Jacob Blake, who was shot in the back seven times by a Kenosha, Wisconsin, police officer.

That led to some backlash for the league as some of its own players spoke out. San Jose Sharks forward Evander Kane, one of the league’s few Black players and a member of the league’s diversity alliance, said he was hurt by the league’s lack of attention on the issue.

“I’ll be honest, I haven’t really heard much in regards to Jacob Blake’s attempted murder. It’s unfortunate, we’re obviously talking about another Black man unarmed being shot in the back in front of his children,” Kane said on Sportsnet.

Minnesota Wild defenseman Matt Dumba, who is also a member of the alliance, added to Kane’s comments.

“I hope guys find it in them to stand up. You can’t keep coming to the minority players every time there’s a situation like this, Dumba said. “The white players in our league need to have answers for what they’re seeing in society right now, and where they stand.”

ESPN’s Emily Caplan said the league didn’t expect to cancel games Thursday unless players across the league took a strong stance, which they did through a conversation with the Hockey Diversity Alliance.

The group’s goal is “to eradicate racism and intolerance in hockey.”

When the league decided to play games as scheduled Wednesday, Dumba called it disappointing.

“The NHL is always late to the party, especially on these topics, so it’s sorta sad and disheartening for me and other members of the Hockey Diversity Alliance, and I’m sure other guys across the league.”