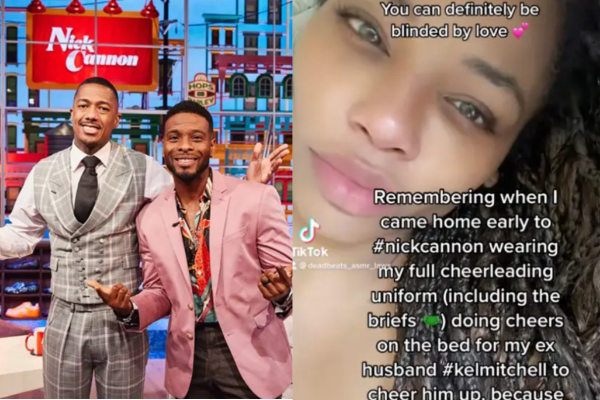 Nick Cannon is shutting down recent claims made by the ex-wife of Kel Mitchell, alleging he donned a cheerleading costume to cheer up his longtime friend.

The Wild ‘N Out creator was recently called out by actress Tisha Hampton who took to TikTok to reveal the time she claims to have walked in on Cannon wearing a cheerleader outfit to cheer up Mitchell after he allegedly cheated on her.

“You can definitely be blinded by love,” Hampton captioned the post.

The video shows her looking at the camera while a caption explains the surprising claim.

“Remembering when I came home early #NickCannon wearing my full cheerleading uniform (including the briefs) doing cheers on the bed for my ex-husband #KelMitchell to cheer him up because he cheated on me,” her TikTok reads.

The unnecessary reveal got social media talking and expressing their suspicions about the dynamic of Cannon and Mitchell’s friendship. After Cannon saw the video posted on Baller Alert, he left a comment sarcastically dispelling Hampton’s allegations.

“Yep!! We Probably had the big ear of corn, a bunch of orange soda, and a couple of Kids Choice Awards up our ass too!” Cannon wrote.

In response, Hampton shadily told Cannon, “I really need my cheerleading uniform back! A replica, something… it’s been long enough,” as captured by NY Post.

Mitchell and Cannon have opened up about the love and respect they share as friends and longtime supporters of each other’s work. As two former child stars who rose to fame on Nickelodeon in the 90s and early 2000s, Cannon never shies away from praising his former co-stars on the hit 90s show All That.

During Cannon’s stint hosting his short-lived daytime talk show, the N Credible huncho welcomed Mitchell to the show to give him his flowers.

“You and Kenan gave me the opportunity to write episodes and stuff,” Cannon said. “I was the audience warm-up, just like Chad over there.”

“At 16, I would drive up in my mama’s old car. Kel would let me sleep in his apartment sometimes and hang out.”

Mitchell and Hampton have been divorced since 2005. But Hampton still finds time to blast her ex, with whom she shares two adult children.

Last July, Hampton accused Mitchell of abuse after he filed a domestic violence report against her, The Jasmine Brand reports. We last caught up with Mitchell while promoting his self-empowerment book Blessed Mode.

During the discussion, the Good Burger star spoke highly of his happy at-home life with his wife and kids. He also touched on his close friendship with Cannon and his former All That co-stars.