Nickelodeon Partners With Because of Them, We Can Initiative for Black History Month 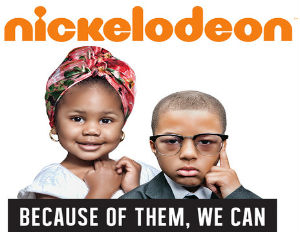 Joining forces to celebrate the greatness of Black History Month, Nickelodeon and the Because of Them, We Can initiative have partnered to launch a campaign that will forge together the relationship between today’s generation and generations of the past.

Beginning Feb. 10, Nickelodeon will air three original 30-second PSAs that feature kids portraying iconic African American figures such as Maya Angelou, Muhammad Ali and Malcolm X just to name a few. In addition to showcasing these features on-air, the network has also created the website www.nick.com/thanks to provide additional information and facts about other iconic African American figures both past and present.

“Through this partnership, Nickelodeon is using the power of our screens to amplify a positive message and connect kids to the lessons of the past that underscore the remarkable contributions of African Americans,” said Nickelodeon’s Executive Vice President of Public Affairs Marva Smalls. “The Because of Them, We Can campaign encourages a new generation of kids to learn about African American history in a way that makes them part of the narrative and is relevant to them.”

The initiative was launched in 2013 as a photo campaign by photographer and activist Eunique Jones Gibson to inspire the younger generation with positive images of African Americans. Today, the initiative has expanded to a nationwide campaign that also includes video content, a book and other products designed to empower people of all ages.

“We are excited to share these videos through the lens of Nickelodeon, empowering their viewers and hopefully, awakening their potential,” said Jones Gibson. “Our goal is to connect kids to heroes, past and present, and create a banner of excellence for all people, young and old, to live by.”

To stay up-to-date with the campaign on social media follow the network on Twitter @NickelodeonTV and on their Facebook page for daily images from the Because of Them, We Can initiative.