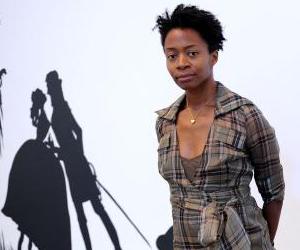 On the heels of all of the recent talk about the Quentin Tarantino film, Django Unchained, with the woes and difficulties surrounding slavery, a controversial drawing has created discomfort at a Newark Public Library. A drawing of a slave performing oral sex had library officials cover it with a cloth after one day because of complaints of insensitivity.

Black artist Kara Walker’s artwork was the topic of discussion as it shows the horrors slaves faced during that time period.

“The library should be a safe harbor for controversies of all types, and those controversies can be dealt within the context of what is known about art, literature, democracy and freedom,â€ library trustee Clement A. Price, a Rutgers university history professor, told the newspaper. “There’s no better venue in Newark where such a powerful and potential controversial drawing should be mounted.â€