ABFFF: 'Rise Up' Premiers in North America in NYC 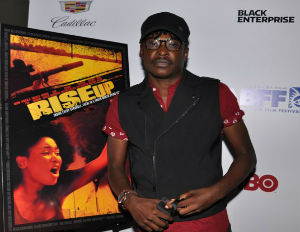 At the 18th Annual American Black Film Festival held for the first time in New York City June 19-22, north American audiences got their first look at “Rise Up,” a gripping fictionalized account of true events surrounding the suffering and frustrations of the people of Nigeria’s Niger Delta and their eventual revolt.

Directed by acclaimed Nigerian director, Jeta Amata, “Rise Up” follows the story of Ebiere, a polished young Nigerian woman who returns to her community in the west African nation’s ravaged, oil soaked Niger Delta and through a series of circumstances, becomes the leader of a local movement fighting the oil company responsible for polluting and pillaging the region.

With a cast of international and American actors including, Vivica A. Fox, Akon, Hakeem Kae-Kazim, Mickey Rourke, Kim Basinger, Wyclef Jean, Mbong Amata, and OC Ukeje, the story takes its audience through the pain of a people, forced to watch the devastation and exploitation of their land by multinational oil corporations with the blessing and collusion of their governments and local chiefs.

“Rise Up” unfolds as two major subplots simultaneously run their course – Ebiere confronts the local chiefs and officials responsible for the exploitation and murders in the region, while a group of “freedom fighters” travel to the U.S. and take the company’s leader hostage in an attempt to expose the truth to the world. As their fight for justice is being waged at home and abroad, Ebiere may be forced to pay the ultimate price.

In an interesting twist, Ebiere, played by Mbong Amata, is based on Ken Saro-Wiwa, a Nigerian poet, writer, businessman, and activist whose tireless struggle and non-violent movement against the foreign oil companies responsible for polluting the region and appropriating land from local people, during their ruthless drive for oil exploration, made him a marked man.

Saro-Wiwa was hanged in 1995 during the regime of the late Nigerian dictator, General Sani Abacha.

Blackenterprise.com asked Amata about the gender switch. He tells BE, “The men have failed us. The men have ruled Africa and failed. So now people are tired of hearing the stories about the men, because they go back and accept bribes. I thought about going neutral and using a woman the audience can feel for and not a man.”

RELATED: Hollywood’s Leading Men Talk the Influence of Black Males in in Media at ABFF

The militant group in his movie is based on the stories of several militant groups operating in the Niger Delta condensed and told as one.