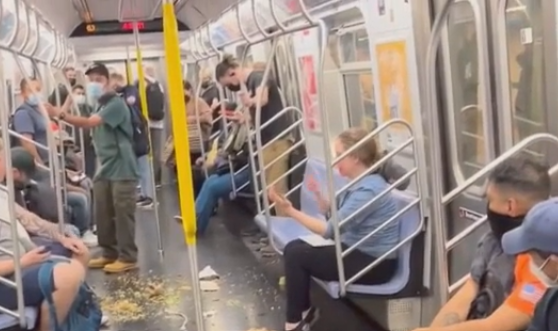 A Karen was left bleeding and drenched in soda after she was caught on video assaulting two Black men with her iPad.

In a video posted on Reddit on Sunday, the Karen can be seen and heard berating one Black male on a moving subway train in New York City. The video shows the woman getting out of her seat and confronting the Black male before pushing her iPad and hitting him in the face with it.

After the Black male hits her back, the Karen goes on to attack him by hitting him with her iPad. He exits the train at the next stop and his friend follows suit. But the woman proceeds to attack the friend, grabbing his backpack and also hitting him with the same iPad, as noted by the Daily Dot.

The Karen then takes the friend’s backpack and runs off with it. After a little tussle over the bag, the woman decides to snatch it and spill out all of its contents onto the train floor. Food goes everywhere and the male was only able to salvage his drink. But seemingly in anger, he opens the soda and pours it all over the woman before leaving the train.

The Karen is left bloody, covered in food and soda and yelling at anyone who will listen. At one point, she even flicked the blood from her face onto other passengers. The heated moment is one of the latest in what can happen when a Karen decides to not mind the business that pays them.

Unfortunately, this time around things got too physical.