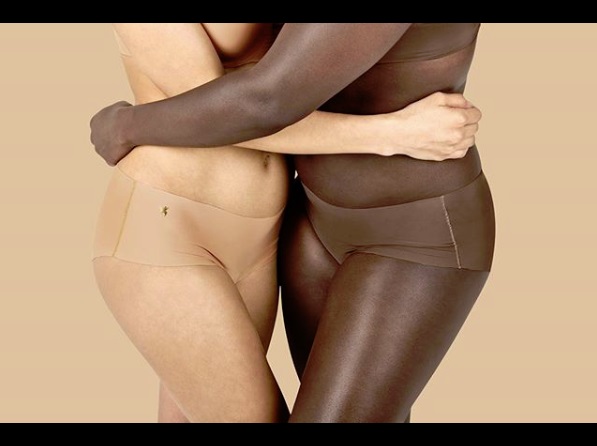 Whether you’re shopping for nude colored makeup, shoes or lingerie, finding apparel that matches darker skin tones has always been a frustrating experience for women of color. Thankfully, women like Catalina Girald, CEO and founder of the Nude for all Collection by Naja, is redefining the color nude for all races and ethnicities.

The Nude For All collection by Naja, is a lingerie line featuring three styles of seamless underwear with a matching bra; underwear sizing from XS-XXL and bra sizing in 32-40 with cups A-DDD–all in seven shades of nude.

In 2012, while watching Gabby Douglas compete in the Summer Olympics, Girald noticed the African American gymnast was wearing a ‘nude’ ankle wrap that didn’t match her skin-tone. This sparked a business idea for an ethically manufactured and racially inclusive range of lingerie basics.

To help spread the word about the Nude for All  collection, Girald linked up with Madonna Badger of New York power agency, Badger & Winters, to create a creative campaign which spotlights real women of all shapes and sizes. “The campaign features a software engineer from one of Silicon Valley’s ‘unicorn’ companies, a ballerina from one of the country’s top three ballet companies, a Harvard business school student, and of course, Gina Rodriguez. Each of the ten models’ success stories represents the brand and its community of smart, courageous, and sexy women, according to a statement released by Naja.co.

More than a product line, Nude for All is a movement that empowers every woman, from wearers to makers. On top of making and selling products suited for women of different ethnic groups, Naja has tapped into a social impact business model which provides above-market wages, flexible working conditions and educational funding for its factory workers. Additionally, through its Underwear For Hope Program, each bra comes with a lingerie wash bag made by women in the slums of Colombia. Nude For All is available for purchase on Naja.co.

According to a press release statement, Naja.co officially launched in 2014 and was quickly named “one of 5 top brands to watchâ€ by The Lingerie Journal, and said to be “chang[ing] the underwear industry through its innovation, attention to detail, and serious heartâ€ by The Huffington Post. Their elegant, fashion-forward designs, quality eco-friendly fabrics, and fine details such as beautifully lined interiors and hidden inspirational quotes quickly captivated the attention of the fashion industry. Naja is backed by prominent female investors such as Mindy Grossman, CEO of HSN; Susan Lyne, former CEO of Martha Stewart Living; and prominent New York Angel, Joanne Wilson. Other notable investors include Tim Draper and Maveron, the Silicon Valley fund founded by Starbucks founder, Howard Schultz.

FacebookTwitterYoutube
← The Business Tech Revolution Entrepreneurs Need To Know About ← 11 Principles to Succeed in Business and Life, from T.D. Jakes
×