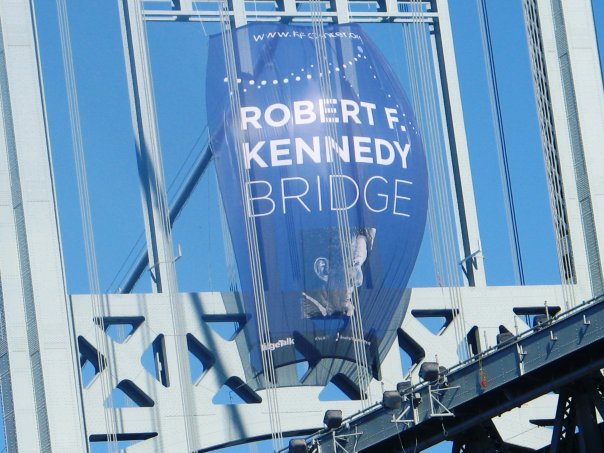 The children and friends of Robert F. Kennedy assembled today at Astoria Park in Queens to commemorate the renaming of the Triborough Bridge to Robert F. Kennedy Bridge in honor of the celebrated former senator.

Former President Bill Clinton, New York Mayor Michael R. Bloomberg, and Gov. David Paterson paid tribute to the spirited senator who was slain while campaigning during the presidential primaries in 1968. The renaming of the bridge marks the 40th anniversary of Kennedy’s presidential campaign.

“Robert F. Kennedy was a champion of social justice and human rights and his spirit is kept alive by his family’s continued commitment to those causes,â€ said Paterson, who in June signed the bill into law making possible the renaming of the bridge.

Many who spoke summoned Kennedy’s compassionate deeds, which they say defined a life dedicated to advancing human rights. While a senator he initiated a number of projects in the state, including assistance to underprivileged children and students with disabilities and the establishment of the Bedford-Stuyvesant Restoration Corporation. The organization was set up to improve living conditions and employment opportunities in depressed areas of Brooklyn. Now in its 32nd year, the program remains a model for communities all across the nation.

Kennedy was assassinated at the age of 42 while campaigning for the presidency.

“Robert F. Kennedy thought on a grand scale and achieved what many thought was impossible. He stood at the summit and he saw the true soul of America. And like the great bridge that stretches above us, he tied us together; people of every color, every class, and every creed,â€ said Bloomberg to a crowd of more than 100 who braved the 35 degree weather to watch the unveiling of a new sign announcing the RFK Bridge.

Other dignitaries in attendance included former mayors David Dinkins and Ed Koch andÂ  Comptroller William Thompson, who is running for mayor of New York City. Thompson recounted Kennedy’s accomplishments during his short tenure as a senator.

“I think if you look at the things he did while he was here as U.S. senator, everything from helping to create and founding Bedford Stuyvesant Restoration Corp., just pushing for housing in New York City and bringing people together, that’s what this is about today; celebrating his legacy, making sure that it will always be part of New York in a number of different ways,â€ said Thompson.

Kennedy’s wife, Ethel, 80,Â  watched proudly as several generations of Kennedys sat behind her to witness the first ever dedication of a government-funded construction project to her husband. Kennedy’s family sought a legislative bill to have the bridge renamed to honor the communities in New York that he once served.

“As a kid, I remember going over this bridge with Daddy,â€ said Kerry Kennedy, founder of the Robert F. Kennedy Memorial center for human rights in Washington D.C. “This bridge is named for a man who spoke to our better angels. Those whose lives