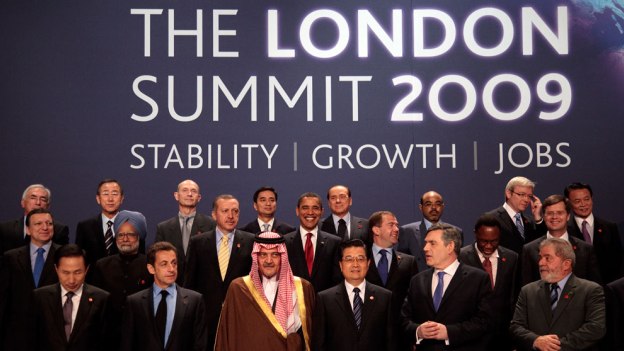 PRESIDENT OBAMA: Earlier today, we finished a very productive summit that will be, I believe, a turning point in our pursuit of global economic recovery.

The challenge is clear. The global economy is contracting. Trade is shrinking. Unemployment is rising. The international finance system is nearly frozen. Even these facts can’t fully capture the crisis that we’re confronting, because behind them is the pain and uncertainty that so many people are facing. We see it back in the United States. We see it here in London. We see it around the world: families losing their homes, workers losing their jobs and their savings, students who are deferring their dreams. So many have lost so much. Just to underscore this point, back in the United States, jobless claims released today were the highest in 26 years. We owe it to all of our citizens to act, and to act with a sense of urgency.

In an age where our economies are linked more closely than ever before, the whole world has been touched by this devastating downturn. And today, the world’s leaders have responded with an unprecedented set of comprehensive and coordinated actions.

Now, just keep in mind some historical context. Faced with similar global challenges in the past, the world was slow to act, and people paid an enormous price. That was true in the Great Depression, when nations prolonged and worsened the crisis by turning inward, waiting for more than a decade to meet the challenge together. Even as recently as the 1980s, the slow global response deepened and widened a debt crisis in Latin America that pushed millions into poverty.

Today, we’ve learned the lessons of history. I know that in the days leading up to the summit, some of you in the press, some commentators, confused honest and open debate with irreconcilable differences. But after weeks of preparation, and two days of careful negotiation, we have agreed on a series of unprecedented steps to restore growth and prevent a crisis like this from happening again.

Let me outline what I think has been most significant.

Number one, we are committed to growth and job creation. All G20 nations have acted to stimulate demand, which will total well over $2 trillion in global fiscal expansion. The United States is also partnering with the private sector to clean out the troubled assets, the legacy assets that are crippling some banks, and using the full force of the government to ensure that our action leads directly to loans to businesses large and small, as well as individuals who depend on credit. And these efforts will be amplified by our G20 partners, who are pursuing similarly comprehensive programs.