Obama Hits Back at Spanish-Language Ad Linking Him to Castro 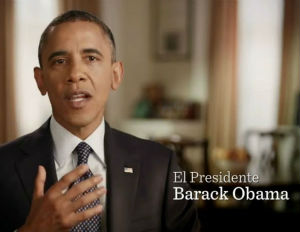 “Have you seen the latest Mitt Romney ad exploiting the suffering of our people?” Diaz says. “President Obama….is looking for the same thing we want,” Diaz says in Spanish, according to the Miami Herald’s translation.

Obama then says, in English, “We’ll continue to seek ways to increase the independence of the Cuban people, who I believe are entitled to the same freedom and liberty as everyone else.”

Diaz then says, “And he’ll continue working seriously, with us, for a free and democratic Cuba. Of that, there is no doubt.”

The ad closes with “I’m Barack Obama and I approve this message” in Spanish.