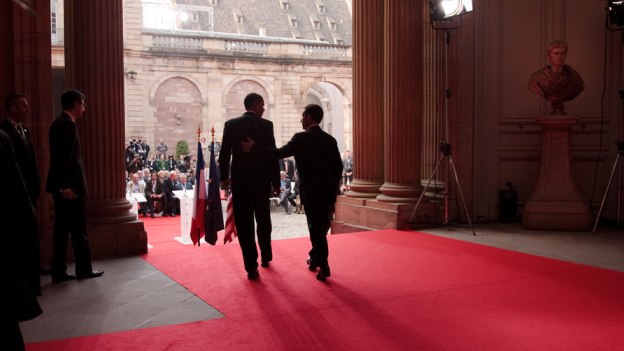 PRESIDENT SARKOZY: (As translated.) Ladies and gentlemen, we apologize for this delay. We have introduction and I will be very brief.

We have reviewed a certain number of issues — Afghanistan, NATO, Iran, Russia, Middle East — and I think — and I stand to be corrected by the U.S. President, but I think I can say that there is a total identity of views between us, convergence of views.

Insofar as I’m speaking just after the G20 summit, I would like to say to Barack Obama just how delighted I’ve been to be able to work hand in hand with him. I want to tell him how much I appreciate his open-mindedness and his clear determination to build a new world. And I can say that at this summit there have been no winners, there have been no losers. There were 20 leaders — of course, the leader of the world’s number one power, the USA, who shouldered the responsibilities, squared up to the responsibilities, and that all goes well for the months and years to come. We have a hell of a lot of work ahead of us because there’s a hell of a lot of problems we need to deal with.

But for us this is a source of optimism to be able to work with an American administration that is clearly determined to listen to its friends and allies and to solve the problems, buckle down and solve the problems.

So, Barack, welcome to France. Thank you. And I really look forward to the weeks to come, because we’re going to take a lot of initiatives, the world needs us to do so.

PRESIDENT OBAMA: Well, thank you so much for the extraordinary hospitality. And it is thrilling to be part of what is a true celebration. France, which is the United States’ oldest ally, our first ally — once again taking an extraordinary leadership role in NATO, thanks to the greatest leadership of President Sarkozy.

He’s courageous on so many fronts it’s hard to keep up. And the energy that he has brought to foreign affairs is something that I think we’ve all benefited from. So I’m grateful to his partnership. Had it not been for much of his leadership I think what emerged from the summit would not have been as significant as it was.

On the issues that we discussed — whether it’s Afghanistan, Iran, Russia — he is continually showing initiative, imagination, creativity in trying to solve problems that have been there for a very long time. And America is not only grateful for the friendship with France, but I, personally, am grateful to the friendship that we’ve developed — one that lasts before either of us — that actually developed before either of us were even elected to office. And it has only grown stronger since.