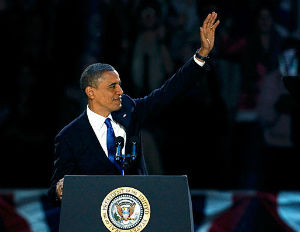 President Obama won re-election to complete his agenda to move the nation “forward.”

As promised, the race started close until the president starting winning a series of key states to close the deal. Obama received 50 percent of the popular vote using a coalition of progressives, minorities, gays and women while his Republican challenger Mitt Romney received 49 percent. He gained 303 electoral votes to Romney’s 206, demonstrating that Team Obama’s aggressive, data-driven approach to capturing key battleground states like Ohio, Virginia, Pennsylvania and Iowa was superior to the opposition. The only battleground state that Romney won was North Carolina.

As a result, the nation’s first African American president became one of two Democratic presidents to be re-elected to a second term in more than 60 years. The. race also communicated the importance of outreach to a diverse electorate to capture the Oval Office.

Thanking his supporters, Obama used his victory speech as a call for national unity. “We are an American family and we rise and fall as one nation,” he told the jubiliant crowd of supporters. “We have fought our way back we know in our hearts the best is yet to come.”

In fact, Obama said that he and Romney “may have battled fiercely because we love this country deeply.” In the weeks ahead, he plans to meet with the former Massachusetts governor.

He said that the campaign “has made me a better president” and the message from voters was clear: “Action not politics as usual. I return to the White House more determined and inspired.”

He stressed, however, that pushing his policies and “progress will come in fits and starts…Argument is a mark of our liberty.” The president continues to contend with the same Republican-controlled House he has in the past two years. Democrats, however, expanded their numbers in the Senate.

Among the items on his second term agenda includes fixing the economy and taming the budget deficit as well a special focus on immigration reform and energy independence. As Obama told the crowd: “We have much work to do.”