Obama's Anniversary Date Consists of Steak at Bourbon in Georgetown 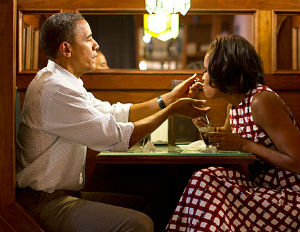 The Obamas had to get a raincheck on celebrating their Â 20th wedding anniversary, which fell on the day of the first presidential debate. (Perhaps you’ve heard a little something about how that turned out.)

Politico reports that the First Couple carved out a few hours on Saturday evening to head to Bourbon Steak, a restaurant in Georgetown. Their reservation was for 7:30 pm, and the couple returned to the White House just before 10.

Obama shouted out his wife at the beginning of his remarks at last Wednesday’s debate in Denver.

“There are a lot of points I want to make tonight, but the most important one is that 20 years ago I became the luckiest man on Earth because Michelle Obama agreed to marry me,” he said. Â “And so I just want to wish, Sweetie, you happy anniversary and let you know that a year from now we will not be celebrating it in front of 40 million people.”

The First Lady told a Las Vegas radio station she appreciated the acknowledgment at the debate. “It was very sweet,” she said. “But I thought to myself ‘don’t use your two minutes on that!â€

Shouting out the First Lady last week was probably a smart move for the president: Michelle Obama is one of the most popular figures in American political life, and far more popular than her husband. A Gallup poll from May found that a staggering 66 percent approved of the First Lady, a number that has remained about the same for two years.