Obama's Promises to Africa in Spotlight on Rare Trip 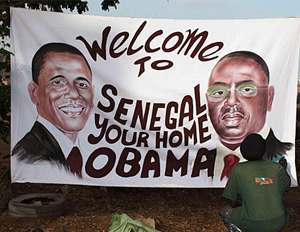 Remember when President Obama was a freshman U.S. senator? He and first lady Michelle took a trip to Kenya, his father’s birthplace, and made the following promise to its people:

“I want you all to know that as your ally, your friend and your brother, I will be there in every way I can,â€ he said, speaking in the Kenyan capital.

By most accounts, President Obama hasn’t lived up to that promise for Kenyans and citizens of several other sub-Saharan nations, who hailed the election of an African-American president as a good thing for relations with the U.S.

According to the New York Times, Obama will again skip Kenya in his second trip to Africa as president. Kenya just elected a president indicted by the International Criminal Court, for allegedly bankrolling death squads driven by ethnic rivalry. That was an outcome the Obama administration wanted to avoid.

President Obama has a little more than three years left to build a legacy on the continent — one that would stand up to those of his two immediate predecessors.