Obama's Step-Grandmother Travels to U.S. to Promote Education in Kenya 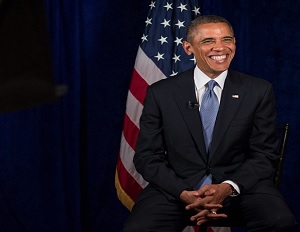 President Obama’s 94-year-old step-grandmother is traveling to the United States to discuss ways to better promote modern education and renovate a health complex in the western Kenyan village where Obama’s father was raised and is buried.

With hopes of leaving a lasting impact and legacy in her home country, Sarah Obama said through an interpreter on Monday that she had “a vision” sitting under a mango tree in the village of Kogelo in 2013 that her work with helping children would live on long after she’s gone.

On Wednesday, Sarah Obama outlined her “legacy plan” with her Mama Sarah Obama Foundation at the United Nations during a ceremony to launch Women’s Entrepreneurship Day, where she was honored among a group of other women.

On Thursday, the matriarch of the Obama family will head to Washington, D.C., with plans to meet with the president and lay the foundation for advancing educational opportunities in Kenya. The first goal of her “legacy plan” is to meet with foundations and individuals in both the District of Columbia and New York to raise money for a new early childhood development center.

So far, the foundation has raised $100,000, with Sarah Obama’s $12 million legacy vision including renovatingÂ primary and secondary schools that were named in the president’s honor after he visited Kogelo as a senator in 2006. Obama’s step-grandmother also plans to modernize a clinic that her foundation helps to fund, and to build a vocational center so that youth who can’t attend college are able to acquire certain skills such as information technology, tailoring, and carpentry.

According to Debra Akello, who serves as executive director of the foundation and interpreter to Sarah, the president’s step-grandmother said in an interview, “I’m living on borrowed time. I’m already 94 years old. Most people my age are gone…and I want to see it before I leave this world.”