I Got Mauled at Redstoneâ€”And Fell In Love With Golf 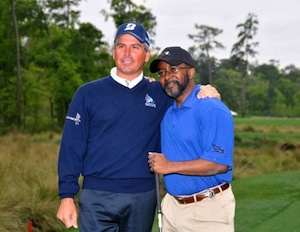 Just playing around at golf is like toying with a tiger. Sooner or later, you’re going to get mauled.

I sure wish someone had given me this advice years ago. Maybe they did, and I dismissed it or failed to pay attention. Or maybe I just forgot. I’ve been playing around with golf–as opposed to committing to the game–for the better part of 15 years. As a senior executive at Black Enterprise, I’ve attended every Black Enterprise/Pepsi Golf & Tennis Challenge, host of the nation’s largest African American competitive golf tournament, since its inception in 1994. As a result, I’ve had opportunities to play at some of the nation’s top golf courses and taken lessons at some of the world’s best golf schools, including the Jim McLean Golf School at the Doral Golf Resort & Spa in Miami, the site of the 2011 Black Enterprise/Pepsi Challenge. I’ve also had access to the best instructors money can buy, including Rodney Green, PGA Director of Golf at Innisbrook Resort and Spa in Palm Harbor, Fla.

Yet, despite having plenty of friends who golf, taking lessons every couple of years, having hours of fun at driving ranges and putting greens, and living literally a 10-minute walk from a great public course, I’d never actually committed to being a golfer. I just, you know, played around. So no one was more surprised than I was to end up playing in my first pro-am golf tournament at the 2011 Shell Houston Open at Houston’s Redstone Golf Club and Tournament Course. My team: Shell President Marvin Odum, NFL Hall of Famer Emmitt Smith (now the CEO of a thriving commercial real estate development business, ESmith Legacy Inc. in Dallas), former U.S. Secretary of State James A. Baker III, and Fred Couples. That’s right; two-time PGA Player of the Year Fred Couples. And on Wednesday, March 30, 2011, between the hours of 8:35 a.m. and approximately 2:30 p.m. local time in Houston, in front of my entire team and a gallery of onlookers, I got mauled–and I had the time of my life. In fact, I wouldn’t trade the experience for anything in the world.

It all started innocently enough. Back in November, I accepted a gracious invitation from Shell Oil Communications VP Tracy Faulkner to be a guest at Shell’s table at the 2010 National Urban League Equal Opportunity Day Awards Dinner. (Shell is a major Urban League supporter and Faulkner had just been elected to the NUL board.) I had the privilege of meeting and being seated next to Shell President Odum at the dinner. I had a great time talking to him and Bruce Culpepper, Shell’s executive VP of human resources, Americas, about everything from football and leadership to our respective upbringings and college experiences. And we talked about golf; I told Odum about our annual Black Enterprise golf event, and he waxed enthusiastically about the Shell Houston Open, a PGA event that annually raises millions of dollars for youth charities in Houston.

Now, I distinctly remember telling Odum that I liked golf, but I had never really committed to playing enough to be good at it–that, in fact, I was terrible at the game. Looking back on our discussion at the dinner, I’m thinking he thought I was exaggerating. After all, with the exception of the pros on the PGA Tour, probably 50% of all golfers will swear to you that they are mediocre golfers; another 40% will insist that they are not nearly as good as their handicaps indicate. Okay, we all know that some of them are lying through their teeth, but that’s a blog post for another day. The point is, no matter what Odum heard me say, I’m betting he was thinking, “How bad can he really be?â€

The answer: horrible. Whatever my mind and body remembered from my past lessons and irregular practice regimen vanished as soon as I got to the first tee, wiped away by the kind of performance anxiety that comes with recognizing that even if I could remember everything I’d learned, I was in over my head. But during the disastrous 18-hole journey that I took from there, a funny thing happened: I fell in love with the game. And I gained more life lessons in a few hours than I would have expected to learn in as many months. I’m known, particularly on social media platforms including Twitter and Facebook, for being a source of sage advice about business, life and success. That day at the Redstone Golf Club Tournament Course, I was forced to walk the talk. Here are a few examples of my tweets and status updates leading up to and immediately after the Pro-Am: