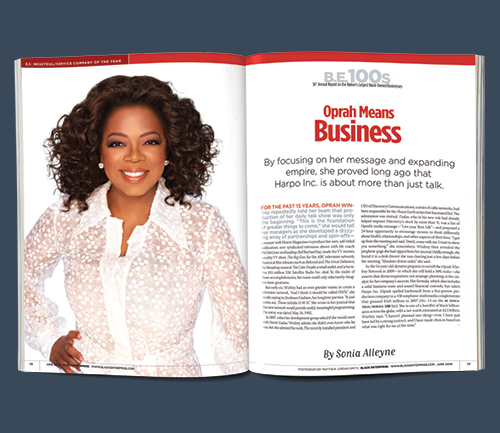 Winfrey is among the shrewdest entrepreneurs and one of the most ubiquitous global brands, influencing the buying decisions of millions worldwide. Since 1986, she has transformed Harpo Inc. into a multime-dia conglomerate that touches television, radio, digital, and film. Her television network, OWN, has grown as a production and distribution platform for African American creators and Black-oriented programming. For instance, she has partnered with Lionsgate, The New York Times, and Pulitzer Prize winner Nikole Hannah-Jones to adapt “The 1619 Project” into a collection of films, television shows, documen-taries, unscripted programming, and other forms of content. One of the few Black billionaires in the nation, Win-frey uses her platforms and resources to push for social justice like using O magazine’s cover to honor Breonna Taylor–the first time in 20 years the media mogul did not grace the cover of her own magazine.