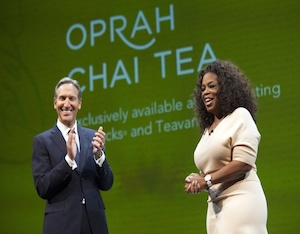 Claiming he ordered the OWN Network CEO’s Starbucks-sponsored Chai tea at a local cafe in fall 2013, Merriweather said the staff added Ambien, hallucinogenics, and heroin to his drink, according to the legal documents.

A report from TMZ dated July 26 finds the patron coming back after drinking the drug-laced drink to apply for a job. Merriweather says it was then that he was called obscene names by the Starbucks baristas on duty who referred to themselves as an “Aryan Nation” and didn’t take his application seriously.

While his claims of spiked iced tea are reportedly real and documented, the Oprah’s Chai tea brand had not yet been added to Starbucks menu during the time of his original claim. In fact, according to Starbucks, the menu did not show any addition of Oprah Winfrey’s preferred drink of choice until spring of 2014–six months after his alleged slights took place.

In addition to his legal claims against Oprah Winfrey and Starbucks, Merriweather is also suing two colleges in Buffalo for $15 million, according to a report by the Daily Mail. This isn’t the first time that Starbucks or the world’s most loved interviewer has been sued–and it certainly won’t be the last.