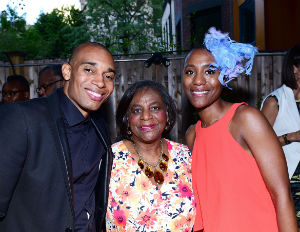 “The dinner exceeded our wildest dreams,â€ says Harvell. “You can’t plan for the energy, the guest interaction. It was just magical.â€

[Related: The Price We’ll Pay for Our Children’s Education: Are There Better Options?]

Renowned talent–some hailing from as far away as South Africa–had been invited to prepare courses at the esteemed James Beard House in Greenwich Village in New York. Harvell says the event, which included a silent auction, raised about $25,000 for the scholarship she and her husband established three years ago. The endowed scholarship will help to support Spelman students from Jamaica and African countries south of the Sahara in perpetuity, starting with this year’s incoming class.

Harvell, who is passionate about food, plans her social schedule around culinary events the way some people plan their schedules around art or music. She couldn’t help but notice how few people of color there are in the upper echelons of food, wine, and beverage. So she and her husband wanted the evening to also provide a platform for accomplished professionals of color in the culinary and spirits worlds.

“My husband and I thought it would be wonderful to have all this amazing talent cooking at the James Beard house,â€ says Harvell. “It is a great honor to cook there. It says you’ve reached a certain level in your career. So we were raising money but also allowing these amazing individuals to share their talent in a venue fitting for their level of talent.â€

The icons at the event comprised the following:

In addition to the scholarship at Spelman, the Dental Kidz Foundation supports other educational endeavors. Created to help the Harvells streamline their philanthropic giving and to ensure that they were giving to causes that were important to them, the foundation provides grants that support initiatives in the education of women and girls, and STEM initiatives that support underrepresented people of color.

“Education is at the root of everything we do. The way we approach healthcare is from an education standpoint. We always educate the parents [of patients]. We’re not just about drilling and filling.â€

Harvell says that education is the most sustainable form of charity, because it can’t be taken away. “When you educate someone and they’re able to go back to their community, the benefits to the people they then interact with are exponential.â€

Harvell, a first-generation American whose family hails from Jamaica, uses her own mother’s example to illustrate her point. Her mother, shown in the photo between the Harvells (above left), came to the U.S. and put herself through nursing school; then slowly, as she was able, she brought over her relatives. “Education helps a person to transcend their own situation and to help other people,â€ Harvell says.

Her parents taught her to get as much education as she could. Her husband, who was raised by his grandmother, was taught the same thing. He was awarded a full scholarship to George Washington; then went to Columbia Business School, and now he and his wife are helping others.

For more information about Dental Kidz, go to www.dentalkidz.com.