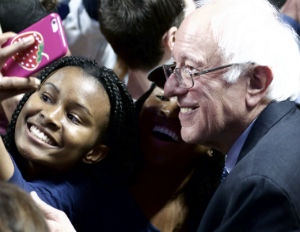 Two organizations in Vermont, the state in which Democratic presidential nominee Bernie Sanders has served as senator since 2007, are making efforts to fund an app for an African American Heritage Trail.

Vermont Partnership for Fairness & Diversity in collaboration with the Vermont Department of Tourism & Marketing launched the Vermont African American Heritage Trail in January 2013.

The trail and its 20 sites across the state promote the exploration of black history in Vermont through cultural tourism.

The heritage trail trek guides visitors to Vermont museums and cultural sites where exhibits, tours, and personal explorations highlight the lives of African Americans in the Green Mountain State. Black Vermonters have been there since the 1600s and include the first African American to graduate from an American college or university as well as the first elected state legislator of color in 1823.

The app, which includes an interactive location-based map, will highlight each different location on the trail. Fundraising efforts to create the app are being launched as part of a GoFundMe campaign.

Other features of the proposed app include:

Detailed information: AÂ page with more information about that site, including its history, accessibility, hours and any associated costs of visiting, available once a user clicks on a location.

A guided “tourâ€ through each site:Â This tour will be given via video by an African American female Vermont resident. This woman will be empathetic, as well as objective and paint a picture of each site related to her experiences and feelings. Viewers will also have the option of adding to the narrative by leaving their own video story of their experience.

Additional tourist information: Most users will be at one of the VTAAHT locations when they access the app so it will be important to them to know what is nearby. Information will include restaurants, hotels and places of interest near each site. This list will be exclusive to the application.

Geocaching: The app will include information for those interested in geocaching related to each site location.

Those interested in donating to the fundraiser can do so here. So far, the app’s fundraising efforts have reached $245. The organizations are seeking $15,000 as a final goal.