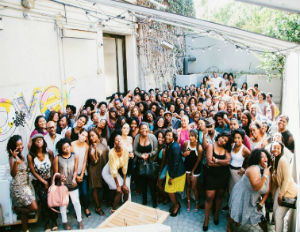 For Lawrence E.Â Adjah, food is the bond that unites us all. As founder of Our Family Dinner, he’s on a mission to facilitate loving social interactions in major cities around the world by hosting community-based family-style dinners for young adults. The rules are simple: make people feel at home and create an environment where people can connect and build–sans networking, swapping of business cards, and discussion about work roles or titles.

What makes Our Family Dinner so appealing is how the organization has used the traditional family-style dinner theme to attract at least 150 attendees per dinner, throughout the United States, Europe, Africa, Asia, and South America.

Before Adja found success as the founder of Our Family Dinner, he worked as a consultant for McKinsey & Co. “As a manager, I was traveling pretty heavily, working 80 hours a week and leading teams on a project, while trying to manage the “Family Dinner,â€ which was growing in 20 different cities. At some point, you hit a reflection point and you have to make a choice on which way you should go in your career. I had financial stability, but I was at the point in life where I wanted more, and I wanted to build my own family. So I listened to the little voice in my head and stepped out on faith to devote my time fully to growing Our Family Dinner.â€

BlackEnterprise.comÂ caught up with Adja, an M.B.A. graduate, to learn more about his career journey.

BlackEnterprise.com: Tell us about the moment that inspired you to organize your first family-style dinner theme for friends and strangers?

Adja: In 2008, I was living in New York but working and traveling pretty heavily. When I would return home, I would get together for dinner with a number of friends who were doing very well professionally, but felt alone because the only opportunity they had to build relationships was either at networking events, which could be exhausting, or in the clubs. This was a consistent challenge for all of us.

So one day I said to my friends, “Hey let’s just get together and meet at Carmine’s restaurant in New York.â€ The only rule is invite friends, let’s not discuss titles or talk about work. About 30 people attended the first dinner and we stayed at the restaurant until closing. At that point I realized, there’s a time and place for networking as well as dating but everyone needs to have a separate space that feels like home–a space that whether you’re married or single you can feel safe and renewed. So we created that space.

When did you realize you could transform this concept into a business?

“Our Family Dinnerâ€ didn’t have a title until 2012 because we wanted to keep it organic. We realized that it’s hard to determine people’s motives for promoting an opportunity, when you attach names. During that time, I moved to the Bay Area for business school. The Bay Area dinners were also thriving and growing faster than dinners in New York. I started receiving inquiries from people saying they needed the family-style dinners in Dallas and Washington D.C. At first, I thought the momentum would die down. But I trusted God, to really create this tradition.