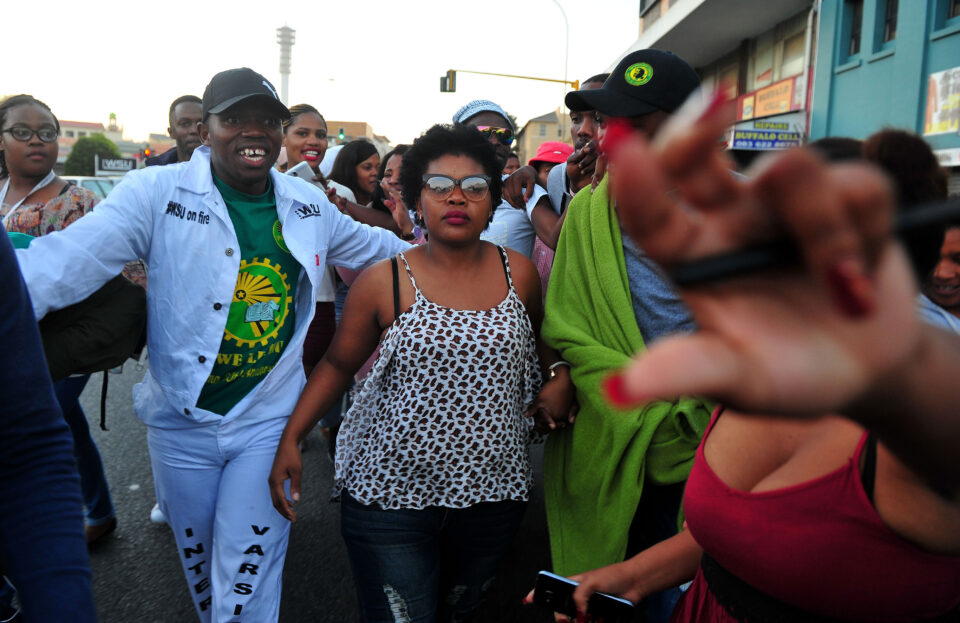 EAST LONDON, SOUTH AFRICA SEPTEMBER 04: (SOUTH AFRICA OUT) Sibongile Mani is seen fleeing a media conference from angry students demanding that she pays back the National Student Financial Aid Scheme (NSFAS) money on September 04, 2017 in East London, South Africa. Mani, a student at the Walter Sisulu University (WSU) was mistakenly given R14 million worth of student money and allegedly spent R800 000 of it. (Photo by / Lulama Zenzile/Foto24/Gallo Images/Getty Images)

A woman in South Africa has been sentenced to five years in jail after a bank mistakenly credited her account with approximately $1 million (in US Dollars).

According to Face 2 Face Africa, South African student, Sibongile Mani was sentenced to spend five years in prison after she spent money from about $1 million that was credited to her bank account when she was supposed to be credited $100 in monthly food allowance almost 5 years ago. On June 1, 2017, Mani, at the time, was a student at South Africa’s Walter Sisulu University (WSU). She erroneously received a payment of about $1 million for her monthly food allowance.

Typically, students received a monthly allocation of $100. In an apparent error, Mani was credited with a payment of $1 million. It was revealed that she was overpaid from the account of the National Student Financial Aid Scheme (NSFAS). The NSFAS gives out loans to students who are expected to repay them after they graduate. The mistake wasn’t found until August 2017.

When Mani received the money, instead of reporting the blunder, she started spending the money. She purportedly spent the money on luxury items, weaves, and mobile phones within two hours of getting the funds. When her account was blocked, she had allegedly already used almost $70,000 in 48 different places across the country.

On Wednesday, March 30, 2022, she was found guilty of theft and jailed for five years. East London Regional Magistrate Twanette, said that Mani’s spending was inspired by “greed not need. The only sentence that is appropriate is direct imprisonment.”

Although she spent money that was not rightfully hers, many South Africans feel the five-year sentence is harsh. The South African Union of Students believes that the people who transferred the funds into Mani’s account should also be held liable.

“The seems to be scapegoating and hiding from the broader corruption and criminal syndicate that exists, particularly around students and funding,” the student union’s president Asive Dlangwa said.