Overcoming a Financial Disorder: What We Can Learn and How to Overcome 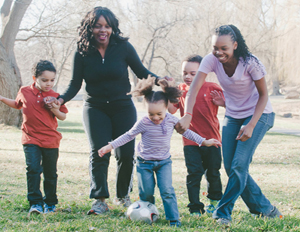 When 38-year-old Daphne Mallory was a young girl, she and her family lived a comfortable life in Liberia. In the early 1980’s however, Mallory’s family became very concerned about the possibility of civil war and sent her to live in England.

Mallory wouldn’t see her family again for more than 6 years, but they were finally able to reunite in the United States and try to rebuild their lives.

“We had to leave everything behind,â€ says Mallory. Â “When we came to the U.S. we put down roots in New England, but it was tough. We lived just two houses down from a brothel on a street with a lot of drug activity,â€ recalls Mallory.

She began to notice in her early teens that the experience left her with a deep fear of losing things.

“I would hold onto things I thought would be valuable one day in case I needed to sell them— in case I needed quick cash. I think because of my upbringing, I was always planning for things to go wrong —a real fear of scarcity.â€

Mallory felt strange about this behavior and she began doing research on hoarding. It wasn’t until she reached law school, however, that she realized she had a real problem.

“I was living in so much clutter that I wasn’t able to produce, work, or be creative,â€ she says.Â  “In law school, we began to talk about billable hours.Â  I realized that if you’re spending 2 to 3 hours trying to find a piece of paper, it would affect your ability to earn a living,â€ she adds.

Her traumatic escape from Liberia and the poverty she experienced in the U.S. were the perfect storm of events to create for Mallory what psychologists call a money disorder.

“A money disorder is a diagnosable mental health condition,â€ says Brad Klontz, a financial psychologist and certified financial planner. A history of trauma is a risk factor for developing a money disorder. “Poverty can be a very traumatizing experience. When there is trauma there is emotional upset, and some of these dysfunctional financial behaviors can provide temporary relief. For example, when you hoard, there is some sense of emotional security that comes with it. And when you’re gambling, there is a rush of endorphins or a high. For a lot of my clients, their money disorder can be traced back to some early family dysfunction or a history of trauma,â€ says Klontz.

Read more about her story on the next page …