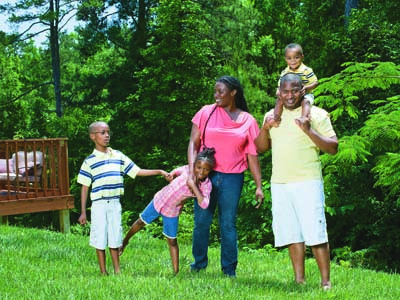 The Advice
Black Enterprise and Merrill Lynch financial adviser Lisa James devised a plan to help the Brooks family get their priorities right and pay down their debt.

Delay new home purchase. To truly be prepared for the future, the Brookses have to reduce their debt and increase their long-term savings, so James advises that they don’t consider a new home anytime soon. Instead, they need to focus on paying off student loans and car notes, and building retirement income.

Earmark future earnings. The couple’s base household income is $133,000. But James notes that Christina has additional earning potential from archeology research grants–Christina has a grant paying out this year for $23,000; next year Christina estimates she will probably write another for $15,000. “If they split 50% of this income to debt reduction and the other 50% to savings, in 10 years, they can pay off their approximately $158,000 debt,â€ estimates James.

Pay off debts without tax benefits first. “I suggest they contact their tax professional to identify items on which they can and cannot write off interest,â€ says James. First, pay off the car loans. The couple were saving $1,000 a month toward their emergency fund. James suggests the couple save just $500 a month and put the other $500 toward the car notes right now, adding any bonuses or extra money toward the cars to pay them down within a year.

Contribute to their IRA. Retirement must become part of Christina’s focus. Both Kenric and Christina’s employers match up to 6%, so James advises they both contribute at least 6% to their retirement plans. In addition, James advises that the couple take part of their 50% savings from Christina’s grant income and contribute to Christina’s existing IRA every year for the next 10 years. “When I ran the wealth simulation for them, it showed that if they stick to their income projections and their savings projections, they will be able to draw down over $130,000 a year between retirements, investments, and Social Security,â€ says James.

Set up a wealth transfer strategy. “Trusts and wills should be very important to this family because they have three small children,â€ advises James. She says the couple should look at what they owe in total debt, including the mortgages, and seek to get an insurance policy that would cover that expense if one of them dies.

James advises the couple begin their 50/50 savings/debt reduction split with the contest earnings. “They should put $1,000 toward debt reduction and $1,000 toward savings,â€ she says. Regarding the Brookses overall plans for reducing debt, James says the Brooks will need discipline. “These are some large numbers. They really have to stick to what they project they are going to do with their income.â€