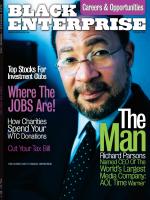 Former Time Warner Chairman Richard D. Parsons is under consideration for the commerce secretary post in the Barack Obama administration, according to reports.

The move comes after New Mexico Gov. Bill Richardson withdrew his nomination due to an investigation into campaign contributors and state contracts.

Parsons is one of a dozen members President-elect Obama’s Economic Advisory Board, which is helping Obama come up with ideas to get the economy moving. His departure as Time Warner chairman at the end of 2008 was widely expected. The news was first reported by CNN, which is owned by Time Warner.

Richardson’s withdrawal was the first blip in Obama’s cabinet nomination process. Obama hasn’t been implicated in the New Mexico case. His spokesman Robert Gibbs said Sunday he expected a new commerce secretary to be chosen soon, but there wasn’t a timetable.

Obama accepted Richardson’s withdrawal with “deep regret,â€ and praised the New Mexico governor. “Gov. Richardson is an outstanding public servant and would have brought to the job of commerce secretary and our economic team great insights accumulated through an extraordinary career in federal and state office. It is a measure of his willingness to put the nation first that he has removed himself as a candidate for the cabinet in order to avoid any delay in filling this important economic post at this critical time.â€

In Parsons’ five years as CEO of Time Warner, he tamed a sprawling, unruly media octopus. Silencing early critics, he took a rudderless company with disparate holdings, such as Warner Bros. studios, HBO, the Time Inc. stable of magazines, and AOL, and transformed it into a uniform, functional enterprise. He simplified the corporate structure, strengthened the balance sheet, and discarded nonperforming assets. Not to say he hasn’t had major challenges.

Despite his management prowess, the stock price has been stuck in a range, fueling shareholder dissent, most notably billionaire investor Carl Icahn’s push to break up the company in 2006. Through it all, Parsons maintained his position as one of the most powerful media moguls on the planet.

Parsons’ joined Time Warner as its president in February 1995, and has been a member of the company’s board of directors since January 1991. As president, he oversaw the company’s filmed entertainment and music businesses, and all corporate staff functions, including financial activities, legal affairs, public affairs, and administration.

Before joining Time Warner, Parsons was chairman and CEO of Dime Bancorp Inc., one of the largest thrift institutions in the U.S. Previously, he was the managing partner of New York law firm Patterson, Belknap, Webb & Tyler.

He held various positions in state and federal government, as counsel for Nelson Rockefeller and as a senior White House aide under President Gerald Ford.

Parsons received his undergraduate education at the University of Hawaii and his legal training at Union University’s Albany Law School.

Everyday Americans Getting Chance of a Lifetime